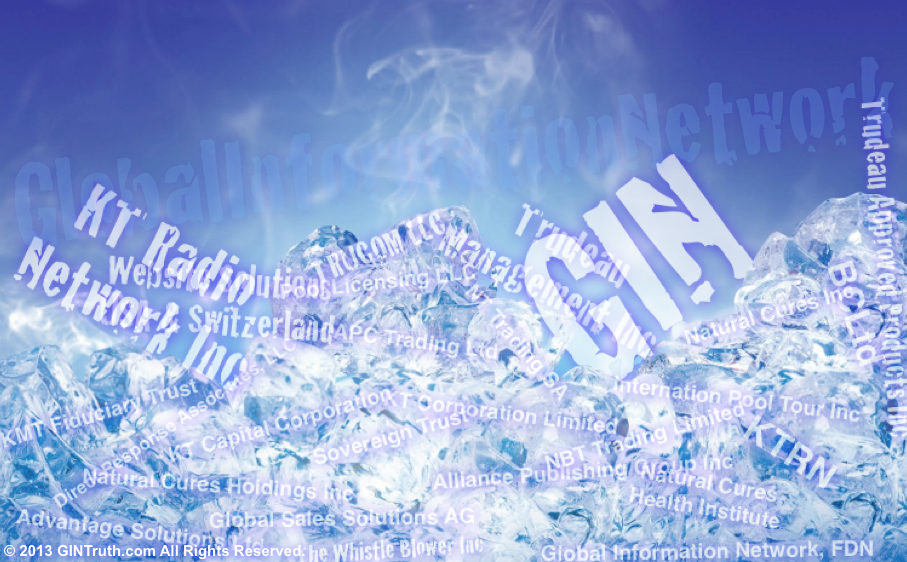 They say every dog has its day in court, and Kevin Trudeau has definitely had his day! The court has decided and Trudeau has had his leash reigned in! Every single entity owned, managed or operated by Trudeau, has been frozen and a court appointed receiver issued to recoup funds owed to consumers. Husein & Coldwell try to claim victory as theirs. Sending Trudeau to jail was not of importance to the courts, as this would mean consumers would likely never see any redress of their money. For some, like Abe Husein and fake-cowardly-not-a-doctor-Leonard-Coldwell, this left a sour taste in their mouths. They would like nothing more than to see Trudeau in jail, getting a daily dose of Bubba Gump – if you know what I mean.

Husein even made a video claiming that the “Feds now have control over GIN”. Actually Abe, no, they don’t. That’ll be the court appointed Receiver. Spouting out equal claims of stupidity, is his “suppress your emotions, live in denial and as a victim and you WILL get cancer! I love that actually!”-buddy, Loony Leonard Coldwell:

This shouldn’t come as a surprise really, given that he’s a dab-hand at making false claims.

But I digress. Easy to do when these two clowns give you so much ammunition to fire at them! And err…no, the IRS is not involved or looking into member accounts. Okay, back on topic…

The recent case was Trudeau’s Civil Case, not his upcoming Criminal Case, which will be held on August 26th. (Click the link for more details on both proceedings) The case was also taken up by The Associated Press, here’s their report on things.

Here is the recent PDF PACER file for the Civil Case – and it’s certainly not “700 pages” as Coldwell claims. It’s actually only 21, but maybe Lenny can’t count. After all, he claims to have cured 35,000 people of cancer yet doesn’t realise it would actually take hundreds of years to do this, unless of course he hired out somewhere like Yankee Stadium, filled it with nothing but cancer victims and said “Okay, you are all vewey schick! Schtappp feeling sorry for yourself und punch zee person nektsch to you! Zat’s it! Release zat emotion, zehn you vill feel better! It’s your own fault you have cancer! Ja! Even you seven-year olds! Go back to schule und punch zee teachers, you vill feel gut und zee cansher vill be kaput!” Damn, there I go again, on another Lenny tangent!

Abe further makes false claims that GIN is being liquidated! Again, this kid has absolutely no idea what he’s talking about and is probably just Loony Lenny’s ventriloquist dummy!

He’s also acting and sounding a lot like Loony, except without the accent.

When Abe talks, can you see Lenny’s lips moving?

Lenny of course, praises Abe for his efforts. He has to, otherwise he’ll lose one of his best monkeys from the tree of stupidity and will only be left with the likes of Sarah Barendese, Peter Wink, Amy Chappell and the other primates. Now call me a nit-picker here too, but is Lenny forgetting years and years worth of investigations and court proceedings by the FTC? I think he is! And let’s not forget our good friends the Cosmic Slut and Salty Droid, who have been blogging about Trudeau’s deceptions for several years, while Abe was still popping (and still is by the looks of his skin) his zits!

Omri Shabat weighs in on both the civil and criminal cases on his recent posting here. It’s shocking to see that Trudeau would even drag his own parents into the affray, by having them put their house up as collateral, should he have skipped the country.

Also in the above screenshot we can see Lenny claim:

…they will not help any loser that still is a sucker for Gin and Trudeau they ONLY collecting their 37 million dollar fine. YOU don’t get a dime and many Gin members will be sued for being a member of a criminal organization and for fraud committed on everybody they signed up etc. Lots of people wil go to jail if you guys would know even 1% of what we know you would leave the country.

Let’s set the record straight here on a couple of things.

First of all Lenny, nobody is going to jail, least of all any GIN Member!

Secondly, GIN is not a criminal organization, it’s a legitimately registered business. You make it sound like it’s being run by some dark underworld group that controls back street drug and prostitution rings.

Thirdly, to say that lots of people will go to jail if they knew 1% of what you know, makes absolutely no sense whatsoever! And why would they leave the country? Surely, as someone who used to work and knowingly scam alongside Trudeau for over 20 years, as an immigrant, who obviously (thinks) he knows more than everyone else, you should be the first one to dig a tunnel to Mexico and get out of the country? And Abe, Lenny does list the documents on his website, but way down on the listings and out of sight from everyone, and he’s too stupid to put a title on each document. This means that people would have to open each document, individually, before they find the right one or any relevant document, and, well…

So, in a nutshell, what does all this mean?

Quite simply, that for the present time, anything with Trudeau’s name on it, associated with Trudeau, appointed by Trudeau, managed by. . . you get the picture. . .is basically now under the strict supervision of the Receivers.

GIN can continue to operate but all monies will be processed through the Receiver. Day to day operations, transactions, etc, now all have to go through the channels of the Receivers.

In effect, GIN and all other Trudeau’s entities, are under seizure and strict surveillance. The GIN staff and staff of all other entities owned by, operated by, managed by, yada yada yada, Trudeau, must comply with allowing Receivers to have access to all business premises, documents, combination and business premises locks, computer access codes of all computers used to conduct business, storage areas for information and tangible goods.

It also means that anyone associated with Trudeau, his entities or acting on his behalf or the behalf of said entities, cannot destroy any information in any form, relating to the business and finances of Trudeau or his entities.

Basically, in a nutshell, the Receivers have full and unblocked access to anything related to Trudeau, for the purpose of recovering the $37 million fine.

It’s all in the documents folks, and pretty clear on its definitions. I’m pretty sure you’re an intelligent lot and don’t need to listen to the likes of perverted fake doctors or a guy whose best advice for dealing with cops is to basically take the law into your own hands.

At the end of the day, Abe’s predictions are premature, and as we’ve noted several times before, he tends to exaggerate just a tad. Loony Lenny is no doubt disappointed that his once bff didn’t go to jail – again – and will equally be hoping there are not enough assets to pay off the Receivers, the FTC and consumers, so that Kevin shares a cell with Bubba.

What he and Abe fail to realize, had they actually been following and listening to the court, is that Kevin Trudeau asked for receivers to be appointed, as a means of redressing customer reimbursement etc. He also, as usual, cleverly knew, that this request, if granted, would keep him out of jail.

Personally, I’m hoping the Receivers dig deep and find enough information and evidence to implement Leonard Coldwell and Peter Wink into this whole scam too. After all, they were a part of it and knowingly for over a year! But that’s just me.

And congratulations to Abe Husein, who has finally learned how to upload documents and is doing so on his Facebook page! Never mind the fact that he’s grabbing them off someone else’s website and trying to make out he’s getting them directly from the government website of PACER.org, as this little snippet from a recent Facebook dialogue shows:

Abe Husein I got these documents right when they came out. I didn’t get them from u Armza/Connie. It doesn’t matter who posted them first. This is not a competition to see who breaks the info first. I only posted these docs because they r major and I wanted everyone to see for themselves that GIN is done.
2 hours ago via mobile · Like

Connie posted them before Abe, for all to see. – Editor

Julie Daniel Abe, whoever gave you got them from Connie who put a watermark on them so we know where they came from. If you ask your source you will see.

The only reason it matters is because you all got so selfish with information in the not to far past.

True. Coldwell stated in a posting that he was not posting documents anymore, because he believed he had exclusive access to them. The man is a pathetic joke unto himself! – Editor

If you want to know the full story join us at GIN network Truth… you’re always invited to do so.

Abe Husein Julie, that just simply is not true.

Yeah, actually, it is. – Editor

There is no freakn watermark.

Yeah, actually, there is. – Editor

No, actually, you didn’t. – Editor

I have never with held information.

Julie Daniel Abe, you may have downloaded the information directly from the government. It is there for everyone. However, the ones you picked to put here were at one time Connies there is proof plain and simple. Actually she doesn’t care. But I think you should be a little nicer to her. She has never hurt you.
10 minutes ago · Like

But then again, Abe never gives credit where credit is due. A trick he learned from Lenny. Way to go Abe – attaboy!

There’s exposé and exposing. Someone needs to teach Abe which is which!

One thought on “ALL of Trudeau’s assets, including GIN, now under tight control of a court appointed Receiver! Assets FROZEN!”