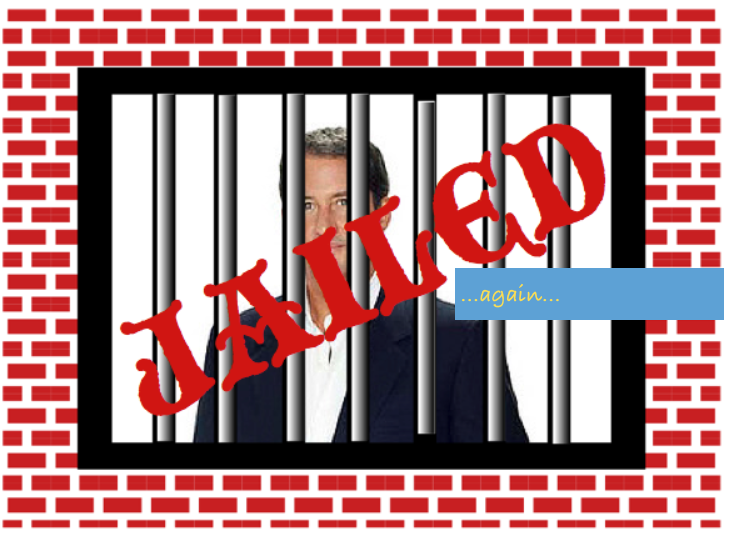 Kevin Trudeau has had his cell door slammed shut by the Honourable Judge Gettleman (civil case), after being found guilty of Contempt of prior court orders, and will be held until he can purge himself of the $36.7 million fine imposed on him, not withstanding further sentencing coming soon.

The courts have had enough of Trudeau’s excuses, lies and deceit. And so, quite frankly, have the rest of us.

Trudeau has played all his cards and if this was a game of poker, he’d be the worst bluffer in the game!

The Chicago Tribune has this story on its website.

The Cosmic Blogger has noted his recent contact from inside his new accommodations, and what he has to say about it, in this latest post to her blog. (See the screenshot at the bottom of this post). As Connie has noted, Trudeau still has his loyal band of gullible followers who hang on his every word. And thanks Connie for sharing the latest PACER document regarding the latest events.

ORDER
For the reasons stated in open court this date and previously, the court finds that
defendant Trudeau is in contempt of this court’s previous orders to pay $37.6 million to the Plaintiff Federal Trade Commission (“FTC”) and to fully disclose his assets. The evidence presented by the Receiver and the FTC has demonstrated that Trudeau has continued to conceal assets and transfer to third parties funds that should have been paid to the FTC.

In addition, the court finds that’s defendant Kevin Trudeau has lied to the court in
representing that he has disclosed all of his assets and disbursements. The court has previously incarcerated defendant Trudeau to coerce compliance with its orders, but released him so that he could defend himself in the criminal case that was pending against him, United States v. Kevin Trudeau, No. 10 CR 886. The court notes that on November 12, 2013, Trudeau was convicted in that case and is currently incarcerated pending post-trial motions and sentencing. Nevertheless,
this court retains the power to incarcerate defendant Trudeau as a sanction to coerce compliance with its orders. Such coercive incarceration is independent of any term of incarceration resulting from defendant Trudeau’s criminal conviction. See United States v. Quinn, 2013 WL 3811651 (N.D. Ill. July 19, 2013) (Shadur, J.), and cases cited therein.

For these reasons, the court orders Trudeau to be incarcerated in this action to coerce his compliance with the court’s orders to pay the $37.6 million to the Federal Trade Commission and to fully disclose his assets as previous directed. Pursuant to 18 U.S.C. § 3585(b), the time spent in custody from the date this order is entered until defendant Trudeau purges himself of the contempt is time spent in official detention for the contempt and not for any other charge or
offense. Defendant Trudeau shall not receive credit, in any sentence in any criminal proceeding for any time served in custody for contempt of this court’s orders. The incarceration for civil contempt shall begin upon entry of this order, and shall remain in effect until further ordered by this court.
SO ORDERED
ENTER: November 21, 2013
__________________________________________
Robert W. Gettleman
United States District Judge

Fellow scamworld blogger, Omri Shabat, posted this parodic note from Kevin Trudeau to his diary. Pretty much sums up KT’s thinking style – and I’m sure, as are many others, he’ll be dreaming up his next idea for pocketing money from the gullible.

Although, at this stage, it looks like he’s going to be limited to conning cons for cigarettes, porn-mags and contraband, for quite some time.

Adding insult to injury, Trudeau even managed to write on his Facebook page, that he chose this path and further goes on to make out that prison is a pleasant experience for him! Which is good, because he’s going to be there for a very long time, so I don’t know why his followers are so concerned. Kevin obviously loves it there!

The reasons will be known and revealed to you all in due time.

In the same way you revealed the December 2012 Mayan prophecies? How much you going to charge for revealing these “reasons”? $5,000? $10,000? Sad thing is, there will always be some gullible hopeful, ready to pay in anticipation of hearing the secret to the meaning of life.

The real secret is simple – believe in yourself, be dedicated to your goals and never give up. The best part is, the secret is FREE !

2 thoughts on “Trudeau found in contempt of previous court orders and incarcerated indefinitely.”