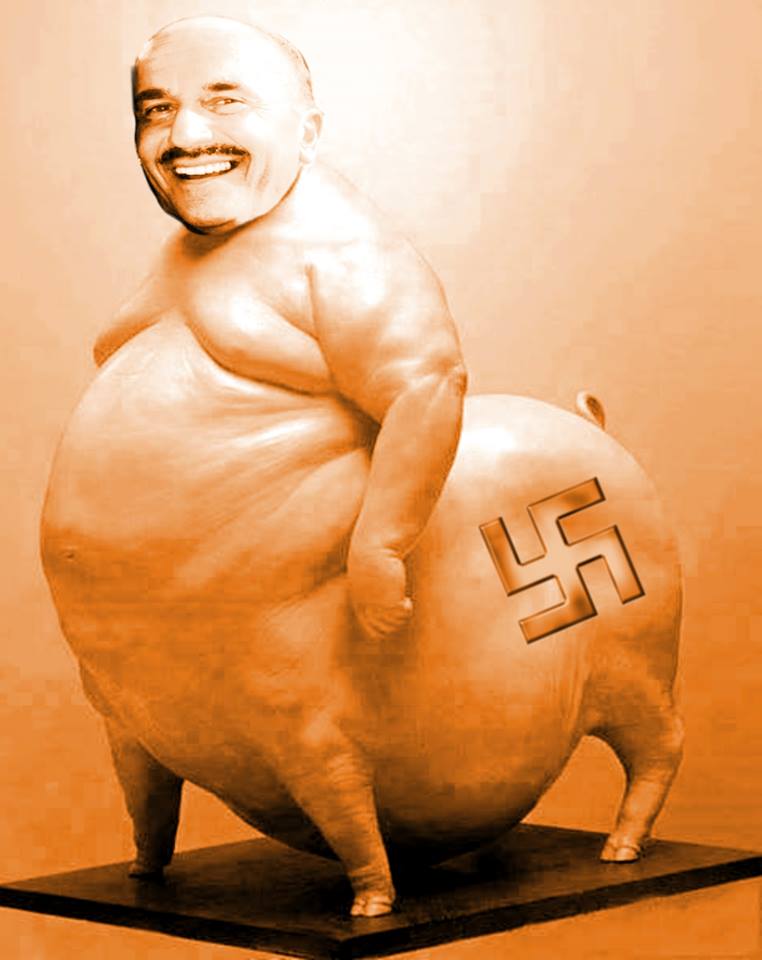 With rants against immigration, refugees and President Barack Obama, could Leonard Coldwell actually be a Nazi sympathiser? You’d be forgiven for thinking so with his recent rants.

Yes, my bodyguards came back from Afghanistan and some where [sic] the former Bodyguards from General Patreas thx Dont [sic] worry my dear friend. I also habe [sic] the German equivalent of a Seal Team Training and was 32 years in Martial arts and a Sharpshooter with the German Military…

[dropcap]F[/dropcap]irst of all, let me start by apologising for not being around the past couple of months. I took a hiatus after a very stressful period of time before and during summer. The situation that was the focus of that stress has been kicked into touch and well, I’m back.

For now anyway. Life’s too short to give a crap about lying fake doctors who continuously lie through their very-likely-false teeth. Or scamming former GIN Members who were fired from Uber and is trying to scam people to join his fight against them by donating to a website he doesn’t technically have yet. Besides which, thousands of Uber drivers have called for him to be stopped, as he is basically taking money out of their pockets with his incessant whining. But then again, every job Abe’s ever had he’s tried to con the system, complain about it and called for action on. Like the time he said people protesting for minimum wage were losers, yet he’s now doing the same thing by demanding Uber put a tipping option on their app. Even though he hasn’t worked for Uber since September.

Or how about this disgusting excuse for a human being, who dressed up as ‘Sex’ for a festival party and actually believes it’s classy!

Quite frankly, I came to the conclusion that life is too short to continue writing about morons like Leonard Coldwell. It’s clearly obvious that he will never run out of idiotic followers who take him at his word, thus only serving to boost his over-inflated sense of self-worth. It also allows him to keep on making up bullshit in order to feel like a real man.

Don’t worry, Lenny. You’ll never be a real man. Ever.

But despite being away from blogging for a couple of months, you’ll be pleased to know that I have been following the scammers and their consistent lies, especially Coldwell.

Quite frankly, I’m surprised that he hasn’t been arrested yet for his hate-filled rants against the Jews, black people, Muslims and the government of his host nation. There are of course many other things the porky little snark has been moaning about, but like I said, life is short, so let’s just get this over with.

In the above screenshot Coldwell posted the link to a story about a holistic doctor, with real qualifications (Lenny take note), who allegedly killed himself. I’m not going to discuss this man in any great depth as I really don’t know enough about him. But it would appear from his Facebook page and comments on links pertaining to his passing, as well as a link that cites an investigation for Medicare fraud, that he was well liked. After reading the story of why he was indicted for medical fraud you have to ask the question, why cheat the system if you’re a successful practitioner?

[dropcap]L[/dropcap]et’s address the statement Loony Leonard made about bodyguards and his ahem…training.

We’ve seen Loony gleefully state that he has spent his entire life devoted to finding a cure for cancer. (Something he claims, but can’t prove, he has done.) We’ve seen him claim that he has been involved with medicine or the study of alternative treatment to conventional medicine, for his entire life since allegedly (read doubtful) curing his own mother of “terminal liver cancer” at the age of 14, or 12, or 9…hard to remember as he keeps changing his story on this and other topics.

So when exactly did he find the time to join the German military and get the “equivalent of a Seal Team Training”?

Just like many of the other bullshit claims this little fat turd makes up, this is nothing more than a fantasy he conjured up to bolster his flagging image.

This goes hand-in-hand with his other bullshit claim of being involved in the martial arts for 32 years. You might want to review this post I made exactly 2 years ago, where he clearly claims in an audio, that he is “…as famous as Chuck Norris in the martial arts world.” He wasn’t then and he isn’t now.

I know I’m probably asking for the impossible, but I challenge Loony Leonard Coldwell to prove to me and readers here that he was ever in the German military and received training that allegedly put him in the same category as a Navy Seal. I think we all know we’ll never see that proof.

Coldwell, you’re an insult to all armed personnel everywhere. Especially those who have given their lives so that overweight, one-suit-only-in-my-wardrobe, -rapist and scamming pieces of crap like you, can have the freedom to spout lies and obscenities at your followers and critics alike.

And we know you were never a sharpshooter of any kind. Why? Because if you were, you’d have imparted your unique wisdom on those who you claim have tried to shoot you and why they missed. It’s obvious because you can’t help yourself once you make up a new lie, you have to embellish everything to appear grandiose. Sadly, the only thing grandiose about you is that pot-belly. Clearly the BePureCleanse isn’t working for you. Perhaps it’s limited and doesn’t work on morons?

Maybe you should try giving it to some of your commenters, who clearly believe you at your word instead of using their God-given intelligence to do research on you. If they did, they’d soon see you for who you really are – a low-life scumbag.

While I’m writing, I just recalled a post I read earlier this year, where Lenny claimed he owned a “horse ranch” in Virginia, just two years after moving into the United States. That claim was refuted by someone who knows him well. You can read more on that story on Connie Schmidt’s blog.

[dropcap]L[/dropcap]eonard Coldwell has been on a bit of a roll over the past few months with his obvious hatred for Muslims and Jews.

There are too many screenshots for me to be bothered posting here, so here’s a few of his more exceptional ones:

My mother always taught me not to paint people with the same brush. Basically, what that means for those of you that don’t know, is that just because one person of a particular group, race, ethnicity etc, does something out of the norm, doesn’t mean the rest of them are the same way inclined. But Leonard Coldwell, in his infinite wisdom of having up to 8 fake Ph.D’s (and make no doubt, they are all fake), just rushes right on in there and classes all Muslims as rapists.

While the internet and media worldwide is awash with stories on the growing immigration problem into the USA and Europe, of Muslim exodus from countries like Eritrea, Lebanon, Syria, Iraq, and so on, much of the media is focused on the stories coming out from the refugee camps.

Stories of rape and murder in Sweden for example. (I would like to point out that although this story has been doing the rounds since October 2015, some are claiming that the event happened in 2013. Please verify everything you read here and anywhere before making any assumptions as final.)

For many in the UK and Europe, the refugee crisis is a very real and growing concern. But as we all know you can’t fight fire with fire. And in this particular post, Loony states that he has an Automatic Rifle (AR) and a couple of pistols despite previously claiming that he did not own any weapons for personal use.

A quick search for gun regulations in the US led me to find this conclusory statement:

In 1986, an amendment to the Firearm Owners Protection Act stopped all future domestic sales of fully automatic weapons for civilian use (non-military/non-LEO). Fully automatic weapons are still manufactured in the US for military and law enforcement use. However, automatic firearms manufactured domestically prior to 1986 or imported prior to 1968 may be transferred between civilians in accordance with federal and state law.

Semi-Automatic AK-47s, however, are legal and easily obtainable in most states of the United States. Certain states like California have specific restrictions which effectively ban new purchases of semi-automatic rifles like the AK-47.

Perhaps some of you gun-toting Americans can clarify this point further? Either way, Lenny having a gun is a very bad idea given that he has no qualms about murdering people for revenge!

In this screenshot, he further reiterates his love of violence as a means of justice:

There’s that fascination with the male appendage again, Lenny. You sure you’re not gay? I mean, it’s perfectly fine if you are. Not my cup of tea but hey, it’s your right to live free!

As for InfoWars? Not even going to bother going into that digital excuse for a website!

Basically, over the past several months that I haven’t been around, Loony Len has been making his usual claims that he is the source to go to for information regarding terrorists, Jews and black people. I’ve missed a lot.

[dropcap]I[/dropcap] couldn’t end this post without a final screenshot to show just how Coldwell’s sentiment is reminiscent of the former Nazi Party of Deutschland. There are so many screenshots and statements I could post here, but hop on over to Connie’s blog to see what she has over there. She at least has kept up to date with things. I hope to be back to writing more from this month, too.

If you think this post is not up to my usual standard, you’re probably right. It’ll take me a while to get back into the swing of things…but for now…here’s a picture of Lenny naked: 2 thoughts on “Leonard Coldwell – Does he have all the traits of a Nazi sympathiser?”