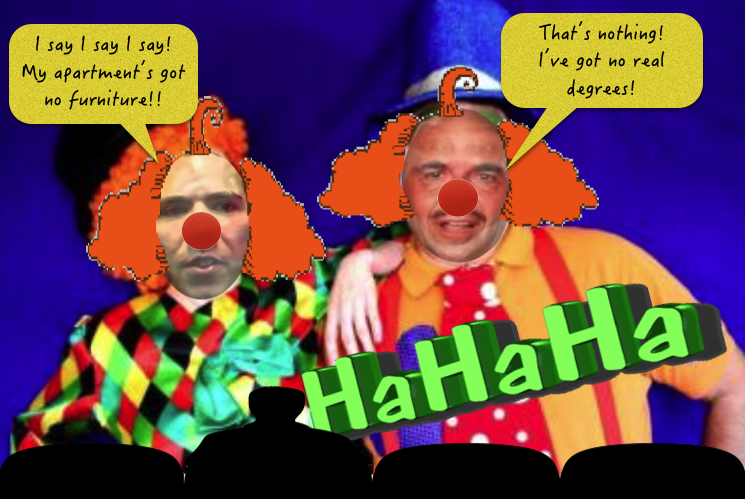 There hasn’t been much relatively new to blog about recently, but as you have all come to expect, it’s only a matter of time before the idiots open their mouths and make a fool out of themselves, again. It’s like a running-comedy show! They’ve been quiet of late, but well, yeah, you guessed it, they just had to open their mouths and prove themselves beyond stupid as the following screen shots will show Abe Husein and Leonard Coldwell for the true morons they really are! Loony doesn’t see the irony when you consider just how rotund the little porker really is! You can see for yourself in this picture.

We’re all used to Loony speaking without thinking, but it’s just that much more hilarious when he pokes fun at nutritionally abundant people without realising he’s looking in the mirror!

Although he’s not nutritionally abundant. He’s just an obese sweaty sexual predator who can’t stand being called out!

There was a time when Lenny sung praises to me and others, as long as we sided with him. But when I started to question his integrity as well as his qualifications (after all, when someone claims to be something but can’t provide a single shred of proof, you tend to have your doubts.), he started turning against myself and others, to become the hate-filled liar he is today.

Well, he’s always been a hate-filled liar, but you get the picture. Lenny as we all know, tells many many lies to make himself seem credible. One of those lies recently has been that he is a Nobel Prize winner!

Hard to believe but he really did put that up on a wordpress blog he’s had set up, just recently:

Unlike Coldwell, I provide facts. So, I researched lists of every single Nobel Prize winner that ever existed up to present day, in all the fields that the distinguished prize is awarded – Chemistry, Physics, Physiology or Medicine, Literature, Peace and finally, Economics. Coldwell’s name or his previous name of Berndt Klein, is not on any of the lists. Here’s just one site that has the entire list.

That’s even better than when he claimed in the audio on this post, to be as famous as Chuck Norris in the martial arts world!

And more recently, he’s laying claim to have been a part of a study undertaken in Russia which allegedly saw the banning of microwave ovens in 1976: Lenny, as usual, takes his information from posts on the web and has never done a day’s full research in his life! It’s also highly ironic that he complains about people who don’t think for themselves! The following screenshots (Links to the links at the bottom) show that it is of course, an absolute load of tosh. You can of course do your own research and find a lot more that prove it’s false and therefore that Lenny is proving himself to be an absolute liar: All made up for an article!

“A friend made this claim on facebook” < -- That should probably have been your first red flag right there.

Okay enough about Loony. This show is getting a little one-side, so it’s time to bring in Loony’s equally stupid partner and fellow male-chauvanist shithead, Abe Husein!

Abe is no stranger to putting his foot in his mouth as you all know. But his latest statements on social media are just beyond ignorant and stupid. Only an ignorant, sexually depraved moron, would say something so stupid that it defies all logic! John Locke will be turning in his grave!

I was in a coffee shop in Hiroshima last week with a friend and her friend, who is nursing her 1 month old son. She said she had to feed him and proceeded to take out a large wraparound blanket from her baby bag, placed it around her shoulders and torso and then moved her baby underneath it and breast-fed him.

She could just have easily just pulled her “titty” out and fed him and no one would have given it a 2nd thought! Why? Because this is Japan and people know that it’s a human function to breastfeed.

Unlike Abe, very few people here and I’m pretty sure much of the rest of the globe, don’t start thinking perverted thoughts at the sight of a mother breast feeding her infant!

You’re a sick and twisted little pervert Abe, much like your partner Coldwell, who is well known for allegedly, inappropriately touching women at conventions and threatens them if they dare to speak out against him.

Breast feeding is certainly not “classless” and it’s definitely not “rude”. It’s the most natural thing a mother can do for her newborn. You just need to get your head out of the gutter, find a girlfriend, buy some furniture and quit bitching that by not spending money you’re going to be a winner! Shit, even his own brother thinks Abe’s an idiot! This recent discussion was about Abe’s frugal living and pipe-dreams: Abe continued to argue his [lost] cause and his brother duly responded:

It would appear Abe thinks he’s beyond comprehending. And he’s often right in that regard as most of the time he talks so much crap he doesn’t even know it! But, I’m sure local law enforcement in his area would be pleased to know about this nugget:

If he won’t splash out on a $15 mirror, there’s no hope for his apartment ever being filled with furniture:

Admitting you drive without a mirror is nothing to be proud of. But if they ever award a Nobel Prize for stupidity, ignorance and sexual depravation, you can bet your bottom dollar that Abe and Loony would be in a very close 1st and 2nd place final!