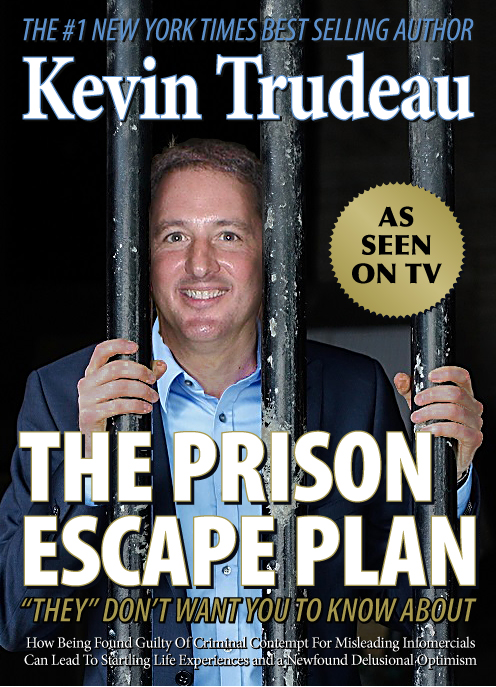 Kevin Trudeau handed a 10 year jail sentence moments after trying to convince the judge he was a reformed character! The day has finally arrived!

Kevin Trudeau’s day in court finally arrived and did not turn out the way he was hoping. Moments after pleading with the judge in a remorseful voice, the Honourable Judge was not falling for Trudeau’s act, and handed him a ten-year jail sentence!

He obviously forgot about his previous two years in jail, when he said:

In the past four months I have been stripped of all ego, defiance, arrogance and pride and for that I am thankful.

So four months in jail strips you of all that, but a two-year stint for credit card fraud, didn’t?

Seems the judge was clearly able to see through Trudeau’s deceptive act, as many of us have in the past 2 years.

During the proceedings and right after the announcement was made, Ed Foreman, former US Congressman to areas in Texas and New Mexico, loudly voiced his protest in the packed courtroom. He was ordered to sit down and be quiet, but when refused, was taken out by security.

Supporters of both Trudeau and Foreman, in the public gallery, cried as the sentence was given, as well as protested the removal of Foreman. Judge Guzman made sure they understood they are forbidden from disrupting courtroom services:

You are not entitled to disrupt the proceedings, I urge you to simply keep quiet and listen.

Foreman received a $150 fine for disturbing proceedings, as well as court fees for the processing of said fine. However, your Angel – Abe Husein – was quick to jump on the event and tell everyone in his little world, including his made up characters on Facebook, that Foreman had also been jailed. As did pervy little fake-quack, Loony Coldwell. You can read the full story from the Chicago Tribune, and see their video report on the proceedings, here.

As my good friend and fellow blogger, AKA “The Cosmic Slut” – Lenny Coldwell’s loving nickname for her – noted in her blog post on the events in court, if the FBI really is going to go after former GIN speakers, then let’s hope they start with Coldwell!

Naturally, Trudeau will appeal his sentence, and while ten years is steep for this sort of conviction, one can’t help but think…it’s justified! Here’s a reminder of just some of what Trudeau was up to in the last couple of years.

Some of Trudeau’s long-time allies and supporters, disagree with the sentence, especially serial scammer Fred Van Liew – he’s the huckster who sells you pendants, water and tiny pyramids (I prefer to call them copper wrapped around paperclips.), who taught Trudeau everything he knows. Here’s what he had to say:

KT has been handed a 10 year sentence. The idiot Judge Gettleman was so ludicrous in this sentence for his own subjective “Contempt” citation against Kevin that Ed Forman protested and was also held in contempt, however the kindly judge let him off with only a fine. How sweet our corrupted judiciary is. You gotta love Ed Forman, though!
Like · · Share · 48 minutes ago · – Fred Van Liew

He was joined by a few moronic idiots who still believe there’s a GIN Council, who were quick to verbally abuse responses made by the better elements of society that applauded the sentencing.

…you couldn’t be more ignorant. But it’s not worth trying to explain or bother with people so I’m just going to save us both the waisted breath.
I known lots who made money and you know lots who lost. It’s just like anything else in life, you win some you lose some, grow the fuck up and learn from it.
The point is Kevin’s getting prosecuted for bullshit reasons of his book promotion.
Not gin, not wether you think their was a council or not, not because his wife or anything else. – Edward Hirsch.

There are two points here Eddie – first of all, Trudeau was prosecuted because he lied and conned people, the facts are there about that. Secondly, GIN was meant to be a club where anyone who joined could reap the benefits of the teachings, as well as the business side of it, if they followed Trudeau’s lessons.

Many did and despite doing everything to the letter, saw little to no return, on their investment of time and money, especially the latter. If anyone should “Grow the fuck up!”, it’s you.

As for Fred Van Loser, the same guy who on the 2012 cruise, cussed like a true loser, simply because he lost about $45 on the Blackjack tables, before walking out of the casino like the world owed him a living, he’s simply bitter because now he’s in scam world without his water boy!

The first night of the cruise, I was excited to see Trudeau on stage. Remember, I was still under the influence of GIN back then. 🙂

What literally started this blog off, was that very night, somewhere on the ocean, just outside of Miami, as Trudeau said:

You can’t make money on the internet.

The only business you need is GIN

There were plenty of other things that set off alarm bells too, but those two especially are etched into my audible-memory for the rest of my days. Why? Because I’ve made thousands on the internet and there were thousands of people on the cruise(s) that had their own business outside of GIN. Some of them very successful.

To have these dimwits support scammers, is beyond belief:

Gin was amazing for my family, the teaching from KT and his council was priceless. We all love KT in our family for what he’s done. Would have loved to hear what Ed said in the courtroom, I’m sure he made more sense than the judge. – Kenneth Skibsted

Err…yeah…there is no GIN Council, never was, and that’s part of the massive fraud Trudeau made up in order to scam your money from you. And obviously Ed Foreman didn’t make sense or he wouldn’t have been carried out by security!

Trudeau has another hearing on March 19th, this one for his Civil hearing. More as that unfolds.

Is ten years too harsh? Some say yes, some say no. Personally, I think that’s a horrible decade to look forward to if you’re KT, but he brought it on himself with his lies, deceit and greed. Something he admitted to in his plea to the Honourable Judge Guzman. If I ever write a book again, if I ever do another infomercial again, I promise no embellishment, no puffery and absolutely no lies,” Trudeau told U.S. District Judge Ronald Guzman in a remorseful tone. “I know going forward I will be a better person.

Hard to believe him when he has proven himself by his actions, to love a lifestyle of greed, lies and thievery.

And if he ever does write another book, maybe it’ll be something like this:

One thought on “TRUDEAU GIVEN 10 YEARS!”