Fake Degrees from unaccredited Universities maketh a Doctor not. 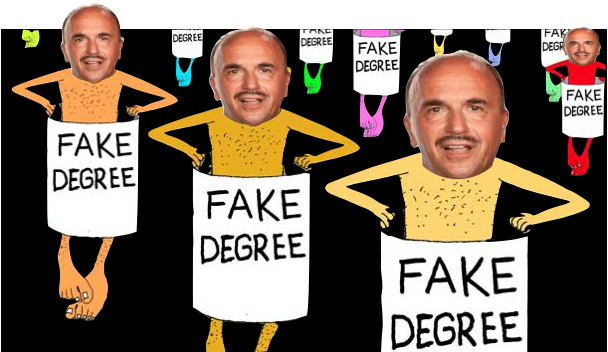 Anyone can have the title of Doctor placed after their name, either through rigorous study in the medical arena, or via study of a particular non-medical subject and even as an Honorary award. The differences between a real doctor who cures patients, diagnoses diseases, etc, and one who can explain in great depth the sex-life of a ping-pong ball, are strikingly obvious. By now, many of you know that Leonard Coldwell claims he is a qualified medical doctor, and yet, not one smidgen of proof exists for any “cure” he claims to have done. Nor is there any proof of any degrees he allegedly holds, bar the Honorary one given to him from an unaccredited university.

Loony Lenny has claimed to have cured upwards of 35,000 people of cancer; 100,000+ of smoking and thousands of others of stress, disease and even poverty.

I’ve often claimed that he has no degrees, and this information is out there. So I decided to dig a little deeper, with the help of a cosmic friend, and the information we found pretty much confirms what we thought.

It’s interesting also, that like his embellishment of numbers for meetings, money, etc, Lenny has also embellished the number of degrees he allegedly holds.

This person had this to say in a report made to the police:

Mt. Pleasant, SC Police Department, 18 April 2007
(page 9 of 15 of her statement)
“When I met Leonard [in Virginia in December 1999, according to earlier part of the statement], he presented himself as an MD, then as an NMD (which he explained that in Germany…meant a medical doctor with a naturopath degree), along with a PhD in psychology, and many other degrees. I think he said he had eight doctoral degrees. He also confided later that he had given back his medical degree because he was disgusted with the medical doctors. Now, I have no idea what is true or not true. At the end of 2001, Doctor Thomas Hohn, a supposed student of Leonard, bought all the furniture and the business we owned called Time Out [a stress reduction business]. Dr. Hohn was visiting, staying with my friend [NAME REDACTED FROM POLICE REPORT PDF], when he [Dr. Hohn] told [my friend] that he had been surprised that Leonard was able to call himself a doctor here because he wasn’t a doctor in Germany. But he said Leonard explained that as a Psychologist in the US, you could call yourself a doctor…”
###

8 Doctoral degrees? That’s 4 more than he claimed to have had earlier last year.

Connie’s research came up with the following info:

I had seen and shared and snarked about this pic previously.

Notice he doesn’t mention WHICH university awarded him this “degree.” However, in other sources (one of which had been quoted and snarked about in my Bernd bridges post), he mentioned “the University in Louisiana at Shreveport,” which is typical semi-literate Loony.

Just a few minutes ago I came across this PDF of the April 2011 newsletter of Louisiana Baptist University, stating that Coldwell had been awarded an honorary Doctorate of Humanities (see page 2 of the PDF, right hand side of the spread)

I don’t know why I didn’t find that when I was first doing research for my Bernd bridges post in May 2012, and researching the update in September 2012. But oh, well… better late than never.

Info on LBU’s accreditation, or lack thereof:
http://en.wikipedia.org/wiki/Louisiana_Baptist_University#Accreditation
So I was wrong for even speculating that it was a legit university. I believe XXXX mentioned in an earlier FB discussion that Loony had an honorary doctorate from a fake university, though.

So it appears that the only degree of any value, is the one awarded to him by a university that, on the whole, has virtually no influence in the real world of education. I can only think that this is akin to filling out an application form for a managerial job and then not turning up for the interview, while telling everyone you are a manager for ABC Co.Ltd.

It appears that the Louisiana Baptist University gives out quite a handful of degrees. Which makes me ponder: Baptists are usually strict disciplinarians – no alcohol, no smoking, no sex outside of marriage, you get the picture. So why didn’t they do their research on Lenny the Letch before associating their [unaccredited] name with him? Surely any “university” of worth would know what they’re doing…right?

Incidently, Humanity degrees are not hard to earn – most 1st world nations will give a ‘Humanitarian’ visa status to anyone staying 6 months or more in a host country, yet the visa has little more meaning than you can work, pay taxes and then go home at the end of it. Having a degree in Humanities, can be as simple as studying for a History degree, one of the easiest degrees to get in any university, 2nd only to Social Studies.

About.com has an interesting article entitled “Is Your Doctor Really a Doctor – Diploma Mills Confer MD Degrees”, you can find it here, and the Federation of State Medical Boards, has lists of all qualified medical personnel/doctors, in all US States.

I did a basic search and Coldwell’s name doesn’t come up in either Virginia or South Carolina. A more comprehensive [paid] search, might come up with more information, but I seriously doubt it.

Given the above information, and knowing Lenny as much as we do, it appears he goes back and forth in order to avoid being exposed for the true fraud that he is.

I’ve challenged Lenny to take his alleged decades of curing people in his non-existent European clinics (the ones he claimed to have all over Europe), and take it to Great Ormond Street Kids Hospital in London, and cure the kids there of Leukaemia and/or cancer.

That was well over a year ago, and he still hasn’t answered the challenge. But why? After all, he’s such a kind-hearted, charitable humanitarian, it’s hard to fathom why he wouldn’t want to add a few hundred kids to his list of cured cancer patients!

Then again, given that he “loves” when people get cancer, you can’t help but wonder why such an uncaring, disgusting, foul-mouthed, alcoholic sexual pervert, would even consider the notion of helping others, when there’s nothing in it for him!

Doctor of Humanities? HA! I think they should change that to Doctor of Fakeology & Absurdities. It would certainly be more fitting!

One thought on “Fake Degrees from unaccredited Universities maketh a Doctor not.”