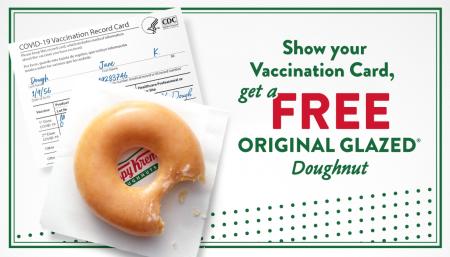 You know what they say –

And it’s usually attributed to people who do stupid things with painful or embarrassing outcomes. From what we’re seeing a lot of lately, people are being coerced into getting vaccinated against Covid-19 with special rewards for doing so. Different States across America are offering anything from free ice-cream, beer and even Marijuana! With one State even going so far as to offer lottery money to the tune of thousands of dollars! Here’s a website with a good comprehensive link to the prizes for idiots, I mean, prizes available. Click here.

Why are they so desperate to get this experimental vaccine into your body and that of your kids? The fact that they are pushing people to do so, should be cause for concern. Yet thousands of people are literally lining up around the blocks of their respective towns, to get injected with a vaccine that has little to zero long or short term conclusive data! The usual threshold for recommending a vaccine comes after a 5 year study. After 5 years of testing or even longer in some cases, changing, experimenting, etc, there’s enough data available to know whether the vaccine will be effective, need changing, further testing or scrapping. With the vaccines from Pfizer, AstraZeneca and Johnson & Johnson, there simply isn’t enough data yet, but they are desperately pushing to get this poison into your system. And now they want to vaccinate children – who have a 99.99% chance of surviving the virus – mainly because they’re 99.99% unlikely to catch it – and they’ve even started to inject pregnant women with the vaccine! I just have visions of Nazi SS laboratories doing unspeakable experiments on human guinea pigs and waiting for the results to come to fruition. Because this certainly isn’t going to bode well for anyone being injected with this poisonous gloop, especially the unborn.

So desperate are they, that governments are considering separating us into two groups – vaccinated and unvaccinated. Basically you don’t have to get the vaccine, but if you don’t, you will not be allowed to have normal things like using public transport, eat in restaurants, coffee shops, bars, go to concerts, sporting events, etc…at least not in the same areas as those who are vaccinated.

Yeah, that didn’t work out too well for South Africa did it?! I mean, basically what you’re talking about here is general apartheid – separation of black and white; Jew and non-Jew; rich and poor; master and servant!

With apartheid’s history, we know it doesn’t work in the long-run and only creates hatred. Yet we’re already seeing it in action through the vilification of one color over another and the suppression of one religion to appease another, and that is happening in countries where the appeased religion is gaining a stronger hold over the historical and cultural beliefs and values of the nation it has chosen to live in. Damn anyone who dares to speak out against this religious indoctrination over one’s own land and even more so if the person doing the condemning is white!

The Islamification of Great Britain and Europe is well under way with Britons and Europeans alike, being condemned as racist, Islamophobic and no better than the Nazis of Germany during WWII. if they dare to speak out and say anything about the ongoing situation.

But that’s what liberals and democrats do well – name and shame anyone who dares to speak out for their own rights and freedoms of expressions. In fact, over recent months, we’ve seen them smear anyone who goes against them and overall, their rhetoric has been given ground to flourish, with the likes of Antifa and BLM being used as props to strengthen said rhetoric. They have been used to spread the dissent from decency into every corner of public life. The riots that destroyed businesses, buildings and even human life in 2020, carried out by both of the moronic groups previously mentioned, were labeled by Democrats as “peaceful protests” despite the entire world seeing the destruction and devastation left behind them. All of this highlighted and pushed down our throats by a very clearly biased and destructive MSM, who are clearly in the pockets of Democrats and their cohorts. BLM itself is seeking to have transparency with its finances after its co-founder was found to have used funds to buy several homes! Yeah, it’s a bit too late for that now – we know how corrupt and ignorant you are as a group, and you have absolutely no credibility or discernment for your own kind, despite your claims otherwise!

There’s a global war for your mind and it’s coming from Big Pharma and Big Tech. Health experts all over the world, politicians, former directors of pharmaceutical companies, doctors, nurses, people who have had the vaccines or lost loved ones to it, are all being censored by the likes of Facebook, YouTube and Twitter. The only upside to this is that we take more notice of their suppression, deletion and bans, and the competition that is not in cahoots with the liberally diseased mindset. We’re seeing the rise in platforms such as Telegram, GAB, Vimeo, OAN (One America News Network), BitChute and others. These platforms will not cave to the bullying tactics of their behemoth counterparts and neither will GINTruth!

You don’t need me to tell you that global relations between the US and other nations have been on a free-fall since Biden stole the election. Russian President Vladimir Putin recently stated that Russia’s relationship with the US has been at its lowest point in many years. He went on to say:

He continued to state that he found President Trump to be “polarizing” because he didn’t stem from a political background unlike career politician Joe Biden.

Kamala Harris, aka VP Sleeparound, recently went to Guatemala and was told in no uncertain terms that the problems on the US/Mexico Border, is totally to blame on Biden’s policies!

The world is growing tired and weary of America because of Sleepy Joe, Harris and the flip-flopping lies of Fauci. Fauci himself in the news recently because of his leaked emails showing his lies and double standards on mask mandates, as well as social distancing bullshit!

Sleepy Joe is in the UK (at the time of writing) attending the G7 Summit. You know, that old chestnut – a group of unpopular global leaders, who think they speak for everyone, deciding on the the fate of our lives. As they claim they want us to do be vaccinated so we can get back to normal, they were seen off camera, no masks, no social-distancing and zero quarantine period for any of the visiting dignitaries! With Boris Johnson and his wife, sat alongside Her Majesty Queen Elizabeth and other world leaders, just mere weeks after Lizzy laid her husband of 73 years, The Duke of Edinburgh, to rest, Biden looked less like the leader of the free world and more like a geriatric patient being allowed to walk outside with his family members, one last time.

No doubt they will have an agenda to rollout the vaccine to as many of their own plebs as possible, in as short a time as possible. And ultimately, a year or 3 down the road, we will see the long-term results of these vaccines, alongside the ongoing immediate effects of vaccine injuries and deaths, currently being denied by big Pharma and big tech.

And before anyone says that there are no such deaths, the CDC themselves claimed recently that according to their own data, in the first few months of 2021, the VAERS website recorded over 1,750 deaths due to vaccines. The number is now at 5,997 (at time of writing). That’s more deaths in the first 5 months or so of 2021, than there were in the entire past decade, combined!

But what they would do to remember is, that our freedoms are paid in full with the blood and sacrifices of those who gave their lives in two world wars, and those who continue to put themselves in harms way for our freedom to prevail. Anything else is just ignorance and belligerence of the highest magnitude.