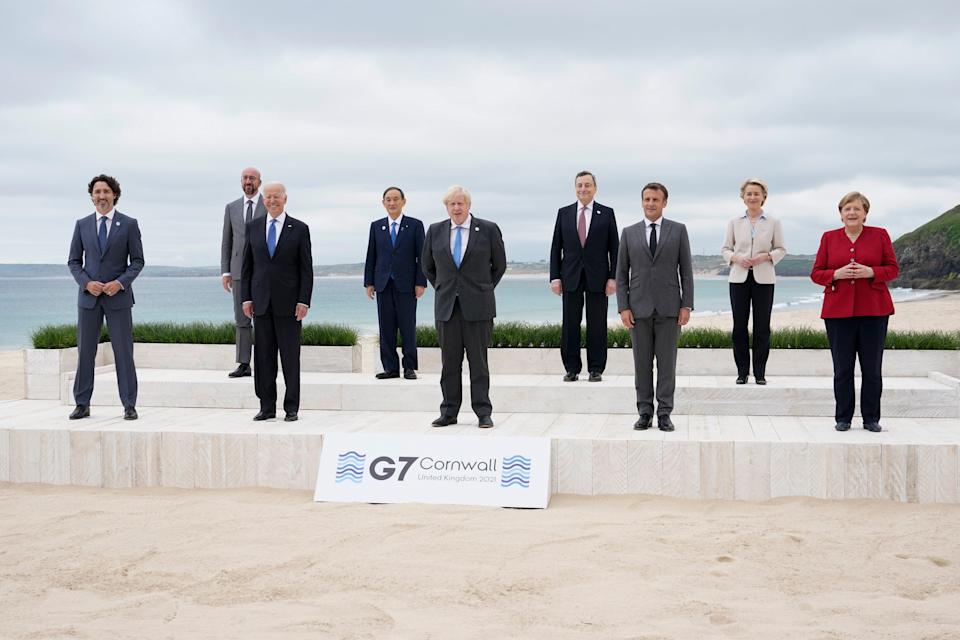 What a week it’s been!

We just saw the G7 Meeting happen in the UK – you know, that thing where the world’s elite leaders get together and discuss how they’re going to fuck up our lives even more than they already are doing. The internet was ablaze with pointing out the hypocrisy of the elites off camera – no face masks, no social distancing and no fucks given. Yet it was a completely different story when the cameras were turned on – masks on, staying well apart from each other, bumping elbows, blah blah blah. What a complete disgrace these people are!

And to top it all off, Bumbling Fake President Sleepy Joe Biden has been caught (again) burbling incoherently and abusing the Press. (But let’s face it, those useless sacks of crap deserve to be abused for the ignorance they’ve been spilling out to the public. But to be abused by JB is like being slapped in the face with a wet sock and being told it’s good for you.)

Boris Johnson has gone back on his word to lift the Lockdown in the UK, again. At this point, I’m surprised that the British public hasn’t gone on full riot mode. There comes a point where you can push the people too far and they will eventually push back. And with UK police harassing the general public for not wearing masks, while London stabbing crimes increase due to lack of police intervention (you can thank London Mayor Sadiq Khan for that – another useless sack of shite who has no place being in a position of power like he is).

With so many abuses of power happening in the UK, USA and other nations, it’s only a matter of time before the powder keg explodes into anarchy, and when that happens, you can guarantee there’ll be a massive change in how we live under government thumbs. The US Constitution for example, was written and put in place to stop governments abusing their positions of power. What we’re seeing in the USA right now are multiple abuses of power and corruption. The Liberal Democrats don’t give a crap about the Constitution, Veterans, ordinary citizens or people losing their livelihood, homes and families. We’re seeing an abuse of power towards our children in the form of Drag Queens being allowed to do activities in schools; we’re seeing young men and women make bold statements about their own existence and demanding their pronouns be changed accordingly. Well, sorry (not sorry), but if you have a penis you’re a male, if you have a vagina, you’re a female. You can’t change scientific facts to suit your dumb rhetoric. Claiming you’re a female in a male body is one thing, but trying to convince the rest of us that you’re really a female who demands to be allowed in female rest rooms, is not acceptable.

People will say that it is Politically Incorrect for me to say stuff like that…well, IDGAF about your PC crap. Does it hurt your feelings? GOOD! FUCK YOUR FEELINGS!! (opens in YouTube – contains strong language, you’ve been warned).

Maybe the rebellion against tyranny starts with this blog post, maybe it starts with you, maybe it starts with governments sitting up and taking note that we have had enough. Facts are facts and it looks ever more likely that Joe Biden and his lying VP Harris, are guilty of election fraud. The rightful POTUS is still Donald J Trump, and if anyone in American politics and law enforcement had any balls left, they’d go in and drag every Democrat out of their seat, and allow legal process to preside over the proceedings. People should be in jail, people like Pelosi, Maxine Waters, and any other Democrat that went on a Witch Hunt for 4 years straight, incited rioting and violence across the US and then tried to blame Trump for it!

But ah….It’s 2021 and there are no real men left anymore to take a stand and put these people in their place – literally, jail. They’ve gotten away with murder, corruption and deception for decades and they’ll get away with it again, and all because we let them. But it’s clearly not for a lack of trying. The Clinton DeadPool for example, lists numerous folks that mysteriously died due to their associations with the Clintons in one form or another. Those sacks of crap will go to their graves having gotten away with murder. One can only hope Hell awaits them.

Liberalism is a disease of the mind and for 160+ years, it has been allowed to fester into the bubbling pile of cat turd it is today. It’s time to reinstate values of decency, fairness and anti-racism. It starts with killing liberalism by not giving it air-time, recognition or value.