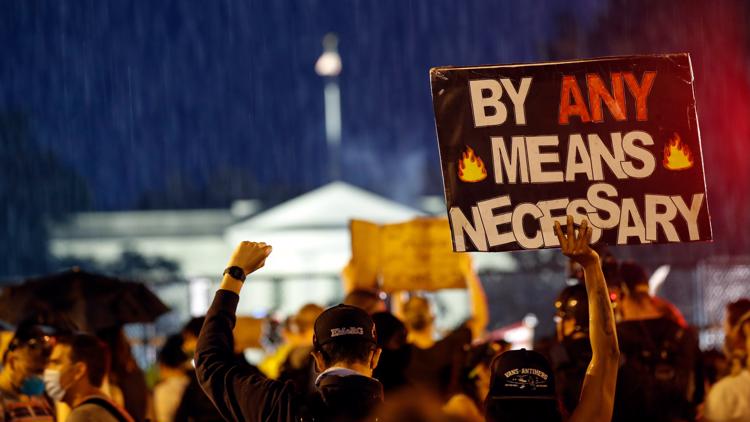 In recent days, it seems more Democrats are speaking out against the idiotic polices and rhetoric of Not-the-real-President Joe Biden, as well as some of the unsavory and moronic groups that have been a thorn in the ass of America recently. Namely, BLM.

Even the GOP are speaking out and sounding off about the traitors in their party – with Mitt Romney and Liz Cheney topping the bill.  Mitt was on-stage at a party rally recently and continuously booed by Republican supporters, some who (rightfully) called him “traitor!”. One of the clowns on stage came to his aid and told the crowd to show some respect, but to little avail. Romney pretty much did his own rendition of Brutus stabbing Caesar in the back when he failed to support then POTUS, Donald J Trump.

Party leader Liz Cheney has also been the focus of recent party and supporter disdain for her own failure to support President Trump, calling his claims of election fraud, false. With an overwhelming mountain of evidence of Biden’s fraudulent vote count, and the ongoing ballot recount in Arizona, she has provoked enough members of her own party, that they will be voting to remove her as party leader, later this month. Current chatter claims that the vote will most likely succeed and she will be removed before the end of the month. Her recent vote count loss in Wyoming is likely a good indicator that this will see the light of day.

As for BLM, you know, that group that claims to stand for all lives, especially black lives, but to date has done nothing that isn’t for their own gratification. Including buying four luxury homes with donation money.

BLM has so far destroyed more lives and businesses than any other organization, with the claimed intent to want to help others. The entire world has seen the images on television news stations and web-based media, of buildings ablaze, dead children, black, white and Asian folks, random beatings of white people, and the ongoing hate attacks against Asians in parts of America. They claim “White supremacy” are responsible for these attacks, deaths and destruction, yet the vast majority of the events are witnessed as being carried out by non-white-non-Asian folks. (Lord forbid I dare say black people, lest I upset some woke liberal black folks who are so stupid and short-sighted to see anyone beyond their own race). Here’s a fact: we are all human and we all have our own problems and own history, with abuse coming from all colors and races, against all colors and races. Yours is not a singularity that has never happened to others. Get over yourselves. You’re clearly NOT helping anyone except yourselves, and you clearly think you’re entitled to the world and everything anyone else has, which you are, but you morons want to have it all and not share your toys!

Well, like any petulant brat, if you don’t get off your high horse soon, you’re going to fall harder than a LeBron missed basket! And it will be deserved.

Democrats continue to call BLM and Antifa “an idea”, despite recent noted video footage (coming soon) of Antifa calling for cops to be shot and BLM attacking police at random, as well as Asian citizens.

Democrats, BLM and Antifa – you’re all cowards, scum and going nowhere. Sure, you think you are, but the fact is, the number of decent and intelligent people that exist in the world, far outweigh you and always will. Civil wars have pounded bullies like you into the ground and as history has shown, always will. You will not win, you will not prevail, you will not kill freedom and liberty for all. Anywhere. You have some legitimate claims for sure, but you’re killing those almost instantly with your acts of hatred and violence towards others, and this is why the world will not take you seriously and give you a platform for implementing change.

Democrats have a history of racial profiling, bigotry and suppression of non-whites (and even some white folks who are working class). Why do idiots still continue to give them any credence? It is a party that should have been disbanded 160 years ago – because let’s face it, they’ve barely changed at all in over a century!