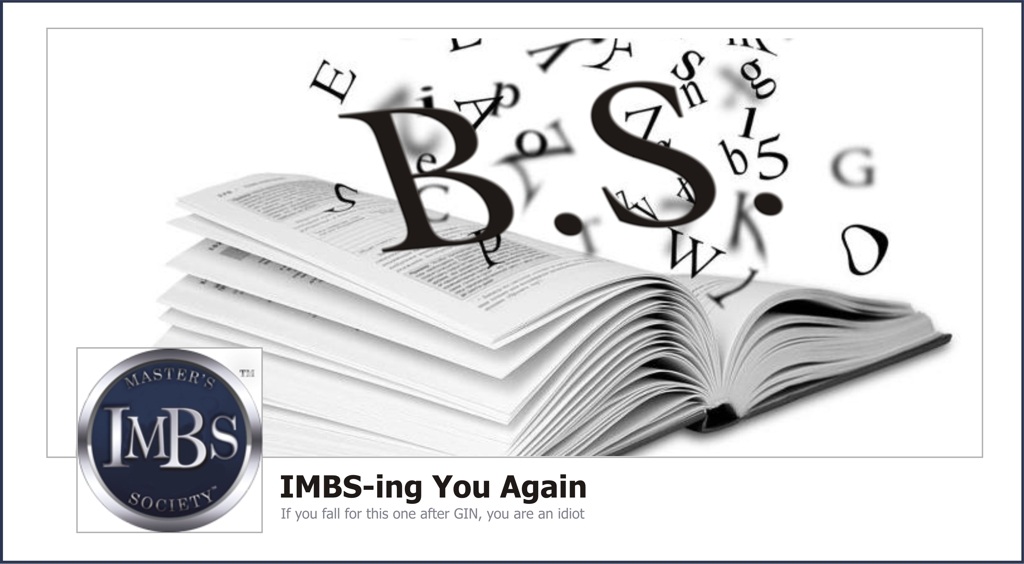 Coldwell now bullshits potential prospects into believing that his IBMS club has been around for quite some time. I dunno…is 4 weeks a long time? I guess it could be in ScamWorld!

Not content with trying to get their sweaty little mitts on vulnerable young women in broken marriages, Coldwell and Wink are now trying to bullshit prospects into believing that theirs is the only “results driven system” in the world!

Here’s what the bald one had to say earlier today on Facebook:

We are the world leading organization for producing results for their members!

And you have to love this piece of sarcasm by a former GINner who has long-since woken up to the bullshit of Trudeau, Wink and Coldwell:

Carol W. I thought this was a new company that you started last month,, so when did you receive the world leading organisation award, that is amazing well done

All the testimonials on the corresponding page (which I’m refraining from linking to on this site. I’ll accept good links, not links to bullshit.) were written by the sucke – oops, I mean attendees of the IBMS’s recent weekend horsey ranch retreat, where some paid another fat-wad of cash to be filled with bullshit, about how useless their lives are without the interaction of Coldwell and Wink, to guide them in a better direction. Others still were written so obviously at GIN events, and yet others written from a mere teleconference call done last year! Some of the testimonial contributors even gave more than one testimony. But one that really stands out was this nugget:

It’s a little fuzzy to read due to the poor quality website it came from, but it’s obviously a lot clearer than Sabrina’s ‘intoxicated’ mind. Shit is rather pungent, and I guess bullshit is no different and can intoxify one to the point of nausea.

As is usual with Wink and Coldwell, they post things too quickly on their shites – darn it, there I go again, too much bullshit on my mind from reading their bullshit testimonials! I meant sites. Anyway, I digress. One thing these two idiots are professional and consistent at, is not checking their information through properly. In an effort to garnish the false claims they make about their success rate with the IBMS Master’s Society Club (started just weeks ago), they have literally lathered the testimonial page with crap written from other events as I said earlier. Here’s one to the left that they obviously didn’t bother to edit properly.

“As fast as I was going downhill I believe I wouldn’t be here today if it wasn’t for You, Kevin and Dr. Hohn.”

Whoa! Steady there Colleen B! Last thing you want is Dr.C making one of his infamous threats to do away with you due to your support and love of King Bullshitter – Kevin Trudeau! I’m guessing from the content of the bullshit in this next one, that this was likely at a GIN event, if indeed at any event at all. “What do you mean Uncle Bernie?” I can hear you almost ask. Well, quite simply, having gone through the entire list of what I suspect are fake testimonials, and given that I’m a trained sociolinguistic practitioner (it’s true. It was an amazingly interesting module I was able to do in my last semester at university back in 1998. Okay, I know that doesn’t exactly qualify me as a doctor of linguistics, but a) it gives me more credibility than Herr Notadoktor, and b) at least I actually went to university (Two if you include my brief law studies at Yale CT, USA), and not buy my degrees from a degree mill like Lenny did.), it seems as if the grammar patterns in several of the “testimonials”, have Lenny’s trademark all over them – spelling, misused tenses and much of it borders on self-appraisal that we have come to see Lenny and Wink do a lot of. Anyway, I’m digressing and talking my own-bullshit now. Back to my point. I’m sure this guy’s cousin was really proud of him for missing the most important day of his and his intended bride-to-be’s, life! But we’ve seen this kind of koolaid crap before too.

You’d think that would be enough bullshit for one day, right? Wrong! Lenny goes on to state the following on his Facebook page that he thinks I don’t have access to 😀 :

Since I trained for that largest organizations in the world I can tell you that no one before has ever gotten these kind of testimonials for results ever. My MTC International is recognized as the worlds leading organization for results via training, education and seminars. Our society is the logical upgrade to that 36 year old NO 1 company. I challenge everybody to a $100 000 dollar bet that no one did or ever will beat out results in time and effectiveness and consistency and continuing to improve results and short, middle and long term success for its members! Any takers?

Well, he’s certainly right about one thing in that statement, “I can tell you that no one before has ever gotten these kind of testimonials for results ever.” Not sure he means the same as the rest of us, but I’m pretty sure no other organization has had such crap written in so-called testimonials – ever! It’s like he’s trying to dress them up!

And what of results from training organizations such as The Tony Robbins Foundation? He’s been in this a lot longer than Lenny has if Lenny is referring to mind-management. Just take a look at the star-studded testimonials on Robbin’s front page! How many celebrity testimonies does Lenny have again? Oh yeah, that’ll be NONE!!

And as for “MTC International” allegedly being “…recognized as the worlds leading organization for results via training, education and seminars.” Is it just me, or has nobody else ever even heard of that company? I’ve been around this business for over 25 years myself and never heard of them at all! But, after a search provided by Cosmic Connie, the organization that Coldwell refers to, does show up, but erm, yeah, on their ‘About’ page, there is neither head nor [pubic] hair to be found of Coldwell. Just to be sure, I’ve sent an email requesting if he has any affiliation, links, ties, history with them, whatsoever. I’ll keep you posted on the results.

Another link that came up in search results leads to this page, with a defunct link for the website of the company under the name Lenny uses. There are several other links, but none of them even remotely related to Lenny’s bullshit.

As for your bet Lenny, Challenge Accepted!! I know you won’t pay out, as does everyone else. Because, like all scammers true to their nature, you can only breathe if money is coming in, not going out! Besides which, you’ve proven yourself a charlatan on all offers to pay out money for information in the past, when Salty Droid himself offered up the information on his whereabouts, as you requested, for a monetary reward! Ironically, Wink makes the claim that “…people are too trusting. All this blind faith BS that people are spoon fed. Results are everything.” And yet, blind-faith is what IBMS Master Scam is being run on! (Click the image on the left to see a larger version). So, in conclusion, for now, we can clearly see how the IBMS Master’s Society, or IBMS for short – is clearly trying to give the impression that it is a well-established, long-founded and unbeatable organization, in it’s current role of offering life-changing events and information. With a self-deluded illiterate womanizer at its helm, and an equally deluded bullshit artist as First Mate, trying their utmost to ridicule every other self-improvement business out there that has ever existed as uninformed and inexperienced organizations, and trying to portray an image of stability driven by long-standing results, to the poor suckers – oops, there I go again – I meant prospects, and vulnerable young women in bad relationships, in order to line their bank books.

Truth and fact of the matter is, they are both full of bullshit and talking out of their rear-ends, and the IBMS acronym, would be better placed if it was written I’M BS! and would certainly have more meaning from the mouths of Wink and Coldwell!

6 thoughts on “IBMS Master’s Society, IBMS, or is it just simply I’M BS?”