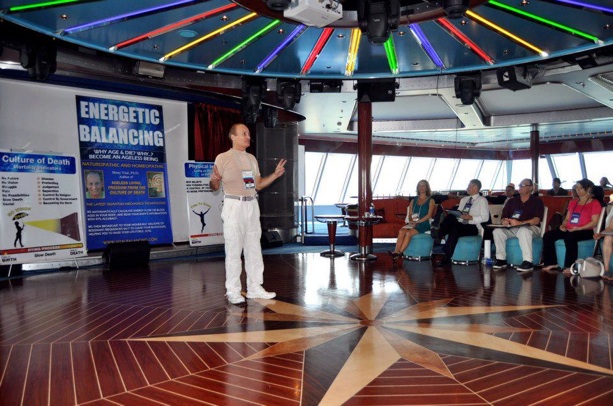 A self-proclaimed health advocate who taught that you don’t need to eat or drink in order to live, Mony Vital was giving seminars on the cruise on how to live an “Ageless life” without death. Ironically, he dies in his sleep on the cruise.

The news has been slow trickling through the system and as yet, there is nothing on his website, about the untimely demise of health advocate, Mony Vital. Still waiting on more news, but for now you can see another posting on it all here. (Read more on Loony Lenny here.)

Vital was in attendance as a guest speaker on his Ageless Living series, where he proclaimed that we could each live a life without food and water!
There are some who would say that he was just another conman, taking the money of the gullible and filling their heads with nonesense. That’s not so hard to believe when you consider that he was indeed known for trying to sell the idea of immortality.

Immortality of course, comes at a price, with different prices, depending on just how long you want to be immortal for. You can read more on it here.

I’m not going to get into a rant here about sales talk, money, gullible idiots, information without evidence, etc. Somewhat out of respect for the deceased and his family, and mostly because I want to highlight the sheer coldness of Not-a-Dr.Leonard Coldwell, regarding the passing of Mony Vital.

In the screenshot below, we can clearly see that Coldwell’s direction is all on himself, as the selfish little twerp, proclaims that Mony Vital was nothing more than a hoaxer. Kind of ironic coming from someoe who calls himself a doctor with no recognised qualifications!

The post itself only compounds to show Lenny’s idiotic and moronic mindset, as he doesn’t even bother to check his spelling…again:

Oh! You mean died!! Funny, I thought a doctor with four Ph.D’s would at least have learnt how to spellcheck and write English better! But, I don’t want to be a nitpicker over trivialities Leonard. Let’s just concentrate on the bigger picture here, which is your blatant disrespect for the deceased and his family. Lenny likes to give the impression that he’s a bit of a tough-guy. In the following screenshot, he posted this “Oath of a Champion” on his Facebook page recently, and claims the author is unknown. But there’s more than a sneaky suspicion that he penned it, although someone obviously did the corrections for him if so: So here we see this guy, who proclaims to be an all-loving, all-caring human being, not only disrespecting a man who was, in all fairness, a very gentle soul who truly believed in what he was doing, and at the end of the day, had a real Ph.d, unlike Lenny’s 4 bought and paid for from the degree mill, ones, but a man who makes idle threats to his government, as if he has more knowledge and power than they could ever fathom.

Maybe in his mind he does!

You have to laugh at the sentence:

“If you make me commit suicide..”

– no one can make you commit suicide. That’s purely your choice. As for your IBMS bullshit, there is no way on this sweet Earth, that you have

People are wising up to scamworld now, and I think you can thank your previous employer that you stole from, for that. The GIN 2013 Cruise was not as full as Trudeau wants people to believe, pictures on Facebook are pretty much good evidence of that. It must have been a lump-in-the-throat moment for Kevin when he stood out on that stage and saw empty seats dotted around the auditorium.

Sadly, Lenny still has his loyal band of followers, some of whom are two-faced charlatans on social networks like Facebook, such is the character of nutters like Sarah J Barendese and her claim that she and Lenny were once brother and sister in a previous life! Actually, thinking about it, that could be right, given that neither of them are capable of rational debate, both think they are always right and both of them think they are God’s gift to the opposite sex!

Anyway, I digress. The bald one has been advertising his business venture of the IBMS, with the belief that people are still stupid enough to pay him a wad of money for his crap. This is one picture he used for advertising. Whoa there Lenny! Where’s that hand going? More to the point – what’s your other hand doing?! I hope that’s an assistant and not some random member of the audience! And more to the point (again), I sure hope you have a licence to physically touch that lady, as I’m pretty sure legal requirements stipulate you need one for such things. Maybe someone in the US can comment on this in the comments section.

So there we have more of Lenny’s lunacy!

Mony Vital (RIP), passes and Lenny jumps on the guy before his body is even cold, in an effort to disparage his image and try to make himself look like an informed intellectual.
Truth is Lenny, you are a douchebag of the highest calibre who bullshits and lies his way into people’s pockets and wallets! And, it would appear, into their underwear too. You’re a coldhearted little prick of a charlatan, and neither you nor your new sidekick Peter Wink, deserve the respect and love of humanity. GINTruth.com would like to extend its heartfelt condolences to the family and friends of Mr.Mony Vital, on hearing of the news of his untimely passing. He leaves a legacy behind him that positively touched the hearts and minds of thousands.
RIP Mony Vital. Mony Vital gives a seminar to a very empty room, on the GIN 2013 Cruise. Ironically the poster in the background asks the question: Why age and die? Why? Become an ageless being.”

You can read more on Herr Notadoktor here.