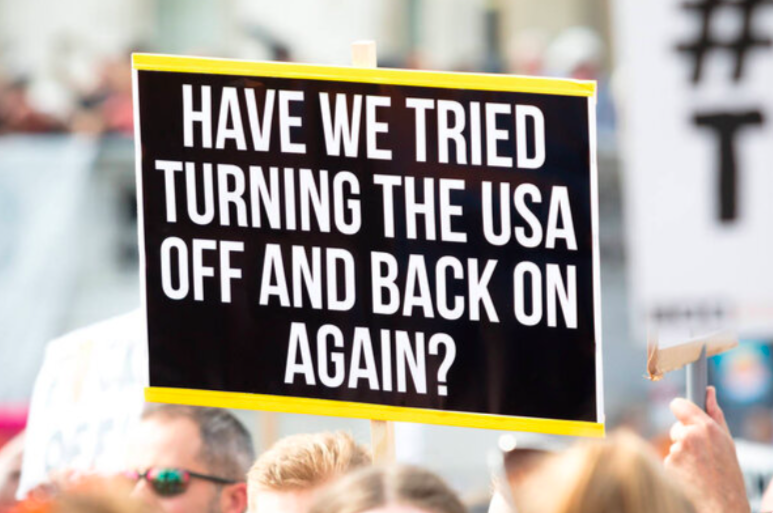 One of the greatest responsibilities for the people of our time is to accept everything that he hears in the pro-government media as a lie and to investigate the truth from independent sources personally!”

February was the last time I managed to actually sit down and write anything, and for several reasons, which I won’t bore you with, but suffice to say, very valid reasons at that.

Over the last seven months, we’ve seen politicians in both Europe and the USA, fabricate one lie after another. The economy everywhere has tanked. The US dollar is losing ground to China and its ever increasing gold reserves, all while Joe Biden and his moronic party members continue to send billions of dollars to the Ukraine, instead of using that money at home where it’s needed the most.

Biden continues to blame his predecessor for the current state of affairs, despite the fact he’s been in office just shy of two years! Thank-God the midterms are around the corner. We can live in hope that the American voter finally gets a true count and see the Dumbocrats lose their grip on power once and for all.

Nancy Pelosi – hang on while I go rinse my mouth with asbestos – continues to spit her vitriol for Trump and Republicans alike. Yet nobody is jumping up to investigate how she and her Drink-Driving-Husband, Paul Pelosi, have made millions of dollars through insider-trading. Just a coincidence I suppose that when Republicans started poking that turd with a stick, Pelosi pushed through a ruling that nobody in Congress could be investigated regarding monetary gains.

You see, Democrats really do believe everything they say and it seems that they make things up on the spot more often than not. There are three kinds of liars:

Pathological lying — In this disorder, someone does eventually end up believing their own lies because they are so invested in the lie that there is no way to back out without serious consequences. There are a select few who aren’t convincing themselves and do know it’s a lie and just continue to play the part, but a significant majority have forgotten it was a lie in the first place. They also start to form entire pseudo-identities to back up their story. They go real in-depth too. I’ve met one who was able to hack his way into a degree that he didn’t spend any time in school to learn.

Mythomania — Similar to pathological lying except this person is truly oblivious to the fact that they are lying. This one is mostly associated with a traumatic childhood or some type of verbal/physical abuse. The lies create a “bubble of safety.” They are fully and completely invested in their pseudo-identity and have no functional knowledge that they are doing this. This goes beyond just lies, it becomes a way of life and some people have built careers on it. Not that I’d recommend going this route, at all.

Pseudologica fantastica — This type of liar is extremely similar to a pathological liar with the exception that an individual with this often has no reason to lie, but they do it anyway. False logic (hence pseudologica). Most lies from these people are what I call “gray lies.” Not exactly black, not exactly white, but a mix of the two. But the point here is the lack of justification for their lying. They don’t need to, but they do it anyway. A common paradigm of this category are people that are all talk, yet no bite. Exaggeration is more or less their modus operandi.Pathological lying — In this disorder, someone does eventually end up believing their own lies because they are so invested in the lie that there is no way to back out without serious consequences. There are a select few who aren’t convincing themselves and do know it’s a lie and just continue to play the part, but a significant majority have forgotten it was a lie in the first place. They also start to form entire pseudo-identities to back up their story. They go real in-depth too. I’ve met one who was able to hack his way into a degree that he didn’t spend any time in school to learn.

You can be the judge of which one Nancy Pelosi falls under. Personally I think she falls under all three, but if I had to choose just one it would be Mythomania.

While Pelosi is clearly in need of help for her lying condition, she’s definitely not alone and it seems to be part and parcel of the Democrat Party of the US, that lies are reality. Lies are facts. Lies are real things because – well, they speak them therefore they must be true. Even sadder is the fact that their followers believe every word out of their filthy pie-holes.

Sure, some of you reading this who think the sun shines of Joe Biden’s arse will immediately be slamming your safe-space-hanky on the table and screaming “Trump told lies the whole time he was in office! How dare you tarnish liberals with the same brush!” – personally, I think all politicians, even the ones I like, are lying scumbags. But you can’t argue with facts when the results speak for themselves.

Under Trump the US economy was stronger, gas prices lower (still makes me laugh when Biden tries to claim his policies are lowering gas prices across the USA given the fact that they rose 300% under him first!), people were keeping more of their money thanks to tax-cuts, energy prices were lower, house-repossessions were massively down and employment was up! Whether you like the man or not, you can’t deny facts and reality.

Under Biden and the Democrats in general, the US economy has turned to shit. The largest inflation rise since the 1940’s, high unemployment, high energy costs (yeah, thanks Joe for shutting the Keystone Pipeline on your first day in office and putting 70,000 people out of work immediately in the process, despite your promises to ensure jobs would be secure). High gasoline prices, as much as 40% gone from peoples’ 401k accounts, meaning fewer Americans will be able to retire as planned. The list goes on.

What’s even sadder is the fact that their minion followers just lap it up. You could tell these people that the Kool-Aid is laced with Fentanyl (of which an estimated 30,000+kgs of the stuff has been brought into the US across the southern-borders), and they’d still drink it if Biden told them it was for their own safety! It’s kind of like Jonestown but on a much larger scale!

Democrats continue to call Republicans and MAGA supporters, violent extremists who don’t want what’s best for the American economy and people. Yet not a single Democrat has been held accountable for the 19 murders, 600 businesses that were destroyed and the thousands of vehicles and homes that were torched by Antifa, BLM supporters and liberals, back in 2020.

Yet people are being held by Democrats in prison, without trial or lawyers, for just being at the Capitol on January 6th.

And isn’t it interesting that despite all the evidence against Joe Biden and his scumbag kiddie raping son Hunter, not a single charge has been brought forth? Of course not, the establishment can’t have their minions being held accountable for actual crimes! Good lord!

No folks, there’s a much higher authority at play here, one that controls the government of the USA and in turn, other global governments. And now there’s talk of a global currency being put in place. Personally I think this is how they will invoke a One World Government. Control the money, control the people. We’re already seeing it happen in China.

Former CCP leader Hu Jintao was forcibly removed from a party meeting just several days ago. He pleaded with his party members, current douchebag premier Xi Jinping being one of them, to intervene, but nobody dared to do so. Of course Xi Jinping – pass that asbestos mouthwash again will ya? – is removing anyone who doesn’t tow the party line according to his rules. Given that he just awarded himself another five years in office, you can bet your bottom-worthless-dollar that shit is about to get real and nasty. All eyes on Taiwan folks. It’s coming, one way or another.

As the quote at the beginning of this article says, do your own research. And if you’re a Democrat, as I know some of you are, don’t be stupid. Do your research, see the facts. If you ever want your party to be taken seriously again, then it starts with you. You need to fix the problem. And trust me (which you can, because I’m not a liberal), the problem is nobody else except the Democrat party, Joe Biden and Nancy Pelosi et-al.

Well, that’s enough from me for a while. You don’t have to look far to find all the above mentioned items on social media and all that jazz, video evidence speaks volumes. I might be back with another article soon. I’d like to get back to writing regularly but in all honesty, I’m about ready to let the world do its thing while I take care of me and mine, because life’s too short to keep giving credence to pathological liars in politics and people who don’t even know what gender they are!