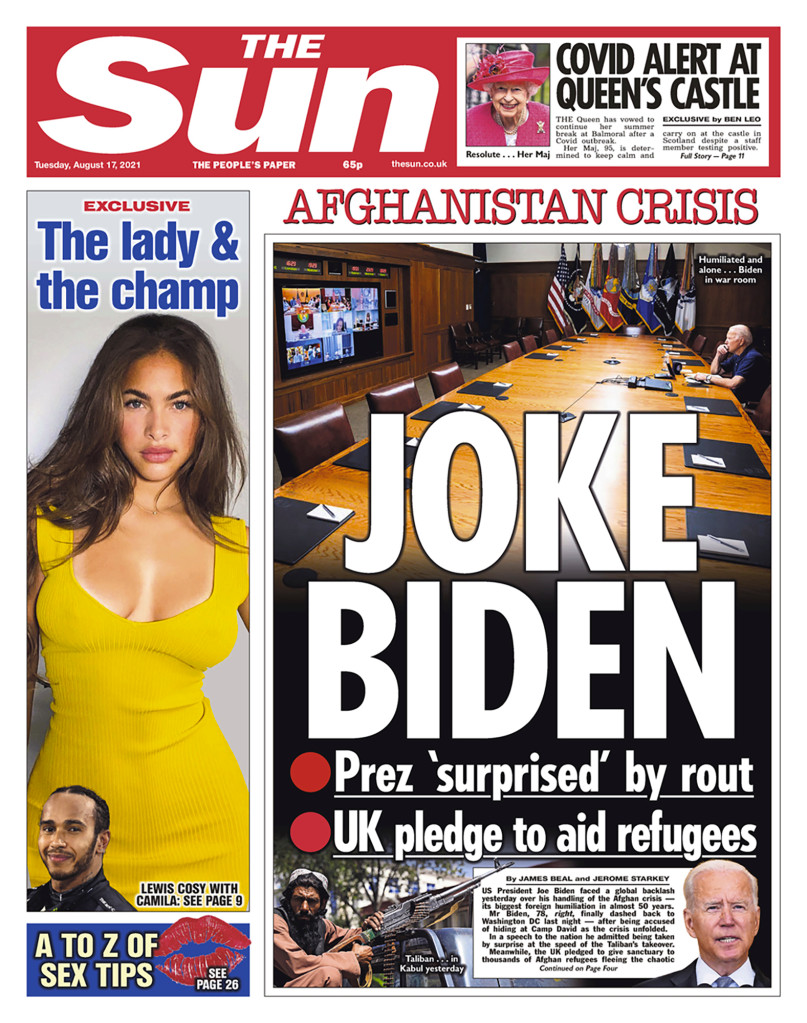 As politicians worldwide continue to backtrack on their promises to end lockdowns and mask mandates, Joe Biden shirks all responsibility for the debacle that has been seen worldwide, concerning Afghanistan.

Biden was quoted as saying he would always bear responsibility for the safety of the American people, only now to ignore the plight of tens of thousands of Americans left behind in Kabul, after the recent decision to pull all US Troops out of the country, against the advice of his advisors.

So sure was he that the Taliban would not take over Afghanistan, and in particular the capital city of Kabul, Biden ordered all Americans and troops to leave the country immediately. He ignored the plight of local people and within days, the Taliban has taken over Kabul and are now firmly planted in the presidential palace after the Afghanistan president bailed from the country, taking 4 car loads of cash with him.

The Taliban have given all foreigners until September 11th 2021 to leave the country. Ironic that it is the 20th anniversary of the terror attacks in New York on September 11th, 2001. But already they have been taking young girls to marry off to old men. Terrified citizens are desperate to flee the country, especially those who have helped the Americans and allied troops over the 20 year war on terror.

People so desperate to leave, they risked, and lost, their lives by clinging to the landing gear carriages of US Airforce planes taking off. Some immediately fell to their death, and recent footage shows the lifeless body of one desperate man, trapped in the landing gear doors, flapping around in the winds caused by the speed and wind of the flight. More on that in this video – WARNING: Graphic Content, watch at your own discretion.

Joe Biden acknowledged that the scenes coming out of Kabul International Airport, are harrowing, but has he accepted responsibility for it? No! Instead Biden is blaming literally everyone and anyone except himself. In particular, he’s blaming Trump for the way things are right now.

Seriously Joe? Are Democrats so pathetically endeared by their own hatred for Trump that they still want to blame Trump for their own failures?

Biden should step-down immediately and take those two useless POS Pelosi and Harris, with him.  America now looks weak and China is taking full advantage of this by sending warships and troops off the coast of Taiwan. China itself is heading for talks with the Taliban in an effort to do business in Afghanistan.

The Biden administration has been a disaster from the first day it came into office, and it needs to be stopped in its tracks. It has no interest in helping the American people, instead choosing to allow hundreds of thousands of illegal immigrants to enter the country, dictate to tax-paying Americans how they can and can’t live with the efforts to introduce vaccine passports, mandatory vaccines and loss of jobs if they do not comply.

And all the while, they STILL want to blame President Donald J Trump, for the situations as they are right now.

Biden, you’re a joke as is anyone who supports you! But worse of all, you’re an insult to all those that gave their life for the right to freedom.