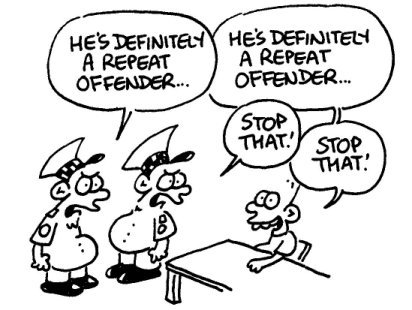 It seems as though there’s never any shortage of gullible people ready to be scammed. And this is clearly something Trudeau is aware of, and preparing for upon his eventual release in perhaps 2 years.

Yes folks, he’s at again! Prison isn’t enough to keep some people from breaking the law again upon their release, and Trudeau is even so blatant as to start preparing to do so, as soon as he can be released in a year or two. That is, unless he’s immediately rearrested upon his release, as noted by our favourite Cosmic Blogger in her January 27th 2020 post.

“Some folks may scoff at the whole idea of Kevin Trudeau being able to do much of anything upon his release from prison. They point out that there’s still a civil case against him and that as soon as he is released in 2022 (or whenever), there could very well be US Marshals waiting to slap the cuffs on him again for the civil contempt case”

It’s not the first time that Trudeau has elaborately started to lay out plans for his next scam, but it’s got to be a new record for most people, to blatantly lay it out whilst still actually in prison. Albeit he’s not technically in prison for fraud at this point. He’s there for showing contempt of court. As noted above in Connie’s post, there’s still the possibility that he will be immediately arrested for the civil case against him. Personally I hope he does get re-arrested and charged upon his release, for all the misery and ruined lives he’s caused.

Back to the point.

From the comfort of his prison library, and with the help of some of his remaining gullible friends, Trudeau has laid out and given the hard sell to, his upcoming guru revelations parody.

I’m not going to rewrite the stuff he’s been saying, or even pick some bits out of others. That’s too much work for an allegedly lazy-pharma-paid-blogger like me, but I will give you the links as well as a link to Connie’s views on this entire facade.

Suffice to say, it all reeks of Trudeau’s usual “You will not be successful unless you buy this from me and sell everything you have to get it!” rhetoric. It always follows a pattern of sorts, starts by saying there’s something fantastic in the works and for a lot of effort on your part, including the part where you lose your life-savings, (although to be fair, in much of the links below, he wants to give it to you for free…in the hope that you’ll purchase mentoring with him for an average $50k a pop!), you’ll need this in your life, the anticipation of not quite knowing what it is you’ll be getting, but only that you need to know that it’s vital to your success. These sales pitches are always long-winded, full of bloat and designed to draw you in to the point you’re literally reaching for your wallet or considering selling your beloved household items such as that 4k TV you worked hard for, just to get in on whatever it is these scammers are selling.

Anyway, here are the links, just click on them to view in a new tab. Read at your own peril, make sure you have a drink handy or time to waste.

The Club – this one reeks of the usual hype to get you interested.

The Ship Vision – You’re gonna love how this one will build you up to be the elitist of the elite!

The Few – You’ll learn to be the dogs-body for all the elite on the ship!

Feel free to share this info with friends and family who are still dumb enough to believe in Trudeau. Whilst I believe everyone deserves a second chance to make something of their life, there should be a limit to how much a serial scammer can continue to get away with!

Much like was the case with wannabe high-society pretender, Anna Sorokin. We could have done with having this judge in Trudeau’s trial!