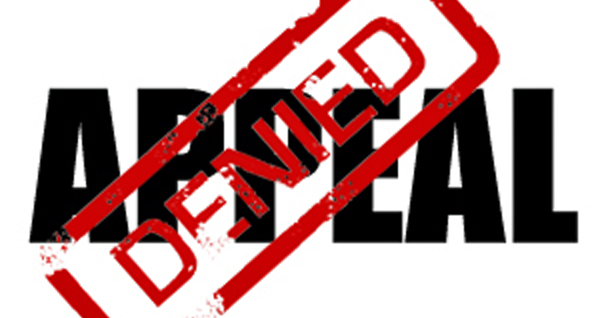 It was a long wait but finally we have the court’s answer to Kevin Trudeau’s appeal to quash his conviction of 10 years!

[dropcap]I[/dropcap]n case you missed the original story of Kevin Trudeau’s sentencing, he’s in jail for fraud and that’s a good thing. While many of his supporters are still crying out on social media how much of a superstar he is, many more are glad to see the once infamous infomercial kingpin, behind bars where he can’t con the gullible anymore.

And for now that’s where he will be staying!

On Friday February 5th 2016, the 7th U.S. Circuit Court of Appeals in Chicago did not believe that Trudeau’s claims of foul play by the US Government in their conviction of him, held any water. Neither did they believe his ludicrous claims that his sentence was too long and jurors in the original case were originally given improper instructions.

This should come as no surprise to those of you that have been following the saga for the past 4 years, as Trudeau has repeatedly concocted one story after another. If he ever does decide to go straight, he should consider a career in writing stories for kids.

[dropcap]H[/dropcap]is original November 2013 conviction was based on false claims he made in his infamous 2007 book The Weight Loss Cure ‘They’ Don’t Want You To Know About as well as during his half-hour infomercials shown late at night.

Trudeau claimed that anyone who used the processes described in his book, could lose weight and cure obesity without any exercise or special dieting practices, but they would be restricted to a 500 calories-a-day-diet. Also included in the ‘plan’ – and this is something that wasn’t made clear during much of his bullshit spiel – was the requirement to inject yourself with hormones, have a colon cleanse and do light exercise like walking.

Now, like Leonard Coldwell – I’m no doctor, but it’s pretty obvious to me and I’m sure you too, that if you restrict yourself to a diet of just 500 calories a day, go for long walks and cleanse your colon out by sticking a tube up your rear-end and pumping enough fluids up there to clean out a New Orleans street after Mardi-Gras, you’re going to see stuff leaving your orifice that you never even remembered putting in your system since playing hide-n-seek in 9th grade!

It really doesn’t take a genius to figure out that you’ll lose weight with less calories and a good flush. (Try some good bran flakes. You’ll get the same effect for a whole lot less dollars!)

[dropcap]A[/dropcap]nyway, back to the case in point.

What most people seem to miss about his original conviction is the fact that it not only included the fiasco of his false claims about his books and informercials, but that he continuously mislead consumers in GIN (Global Information Network); Tried to avoid paying taxes on approximately a quarter of a million dollars by filtering it through a casino with his wife; Moved millions of dollars of GIN money to offshore bank accounts – for this point alone, it is believed he will flee the USA on his release and head to Switzerland and/or the Ukraine, where it is believed he has stashed several million dollars. The list goes on.

As the courts were limited in their scope of available information carried out during investigations into GIN, and given that the case was in fact an ongoing one for more than a decade between Trudeau and the FTC, the above points are pretty much mooted as being plausible reasons for incarceration in this particular case. That’s not to say, and it is rumoured, that further charges will possibly be made at later dates concerning those points and more.

Trudeau’s…infomercials included blatant misrepresentations that were patently false and outright lies. It’s no surprise that the jury reached the same conclusion. The evidence was easily sufficient to convict.

She went on to further note that the sentence of just 10 years given to Trudeau, was sufficiently shorter than the average 20 – 25 years recommended under Federal guidelines for such cases.

Prisoner Number 18046-036 is not eligible for parole until July 18th 2022, although it’s not determined if he will get time off for good behaviour.

For those of you interested in the case number you can read the court documents of the case: U.S. v. Trudeau, 7th U.S. Circuit Court of Appeals, No. 14-1869

[dropcap]T[/dropcap]rudeau never stopped with one lie after another to avoid going to jail. Then again, he never stopped with one lie after another while he was head of his money making machine, GIN. People lost their life savings. Some lost their homes. Others still, lost their marriage. And a few even purportedly died from stress from their losses and it is rumoured that one individual took their own life as a result of losing everything to Trudeau’s elaborate scams.

Is 10 years justified? Some think not. Some think it’s too much for the particular conviction used against him. Perhaps. While some of us think it wasn’t even close to being enough.

While he’s sitting comfortably in a low-security prison in Montgomery, Alabama, others are sitting on empty bank-accounts and still reeling from the aftermath of Trudeau’s lies. For them, his imprisonment is hardly justification for their losses. But to those people I’d say – who do you listen to? Is KT really to blame? Or should you be looking in the mirror for being so damn gullible in the first place? Some of you already had fortunes and really didn’t need the likes of previously imprisoned for credit card fraud scammers like Trudeau, to increase your wealth and well-being.

As for Trudeau’s next move, we will have to wait and see. But one thing’s for sure – he has plenty of time to concoct his next bullshit excuses for an appeal and you can bet your bottom dollar that he will be blaming everyone except himself for his demise!