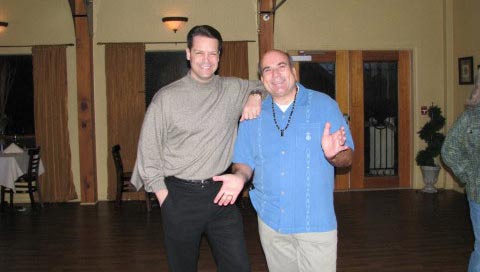 Peter Wink has made many claims on his resume that don’t stand up to
scrutiny. You can check sales of his book for starters.

A few that I know about are his claims about his time at Accenture, he
claims he was a trainer and independent consultant of some sort. In reality
he was more of a joke around the office. He never made it past his entry
level position. He saw new hires get promoted past him regularly until he
decided to make up his own title and business cards. He called himself a
“Consultant 5″ and introduced himself with that made up title. Unfortunately
that title didn’t exist at the company. He had several run ins with
superiors who usually got tired of his stupidity and incompetence until they
were able to transfer him out of their department into some other dead end
black hole at the company. When asked why he was transferred he would make
up a story about having to care for a sick relative.

He also claimed to be a marketing guru at Jamba Juice, taking credit for
their entire Midwest expansion. What he actually did there is still a
mystery, even to the marketing and HR departments at Jamba Juice. Calls to
several departments at Jamba Juice were fruitless in finding 1 person who
even knew who Peter Wink is. One HR person told me that she looked him up
after others had called and found his ridiculous webpages but as far as she
knew he never worked for any corporate entity at Jamba Juice. He may have
been an hourly employee at one of the Chicago stores, but she wouldn’t have
any records of employees at that level. She mentioned his super successful
Jamba Juice promotion photos and suggested that those photos may have been a
company picnic for employees of one of the stores. Nothing to do with any
large scale promotion involving Peter Wink. As a resident of the Chicago
area, this HR person found his photos of “private tours” “big promotions”
etc. hilarious. Her comment was “I’m surprised he didn’t take photos at the
wax museum and claim to have dated Marilyn Monroe”

He did get his college degree in 1996 after 2 grueling years at a local
Chicago directional college. He was pretty proud of that. You can imagine
the stellar Jesuit education he received there if he writing style and
grammar are any indication.

His next public failure was as Joe Vitale’s something or other. One story
says he got fired after a botched scam trip to Russia, Wink’s expertise left
his boss fearing for his life.

Next was GIN, every botched promotion in GIN can be traced right back to
Wink up until he got fired for incompetence and pretended he quit for moral
reasons (imagine?)

His current enterprise in default is his partnership with Lenny and IMBS
Masturbators Society. Despite his promotion skills, copywriting skills and
personal magnetism, IMBS was never able to attract more than 25 paying
members. Hardly enough to keep him in fake Rolexes and fancy brass rings. As
the blogs have exposed, IMBS was launched with copy stolen directly from
GIN, complete with references to Kevin Trudeau and GIN. He wasn’t even
competent in plagiarizing GIN literature. His title creating skills haven’t
waned though, he titled himself Supreme Partner of IMBS.

His time at NC, editing self help tapes and selling NC crap was covered in
blogs. Seems like the last honest job he had though.

Currently Wink is flailing around scam world, looking for a scammer to latch
on to after his last partner burned as many bridges as he could cross. He is
advertising his skills as Master Copywriter and Sales Pitch creator on the
most unprofessional webpage you can imagine

Some have speculated that he lives off the hard work of his wife in their
Schaumberg condo, when IMBS started failing it seems she got suspicious and
started attending some of IMBS’s dress up events to see what toilets her
hard earned money was being flushed. As a gainfully employed woman, I am
sure she can spot a business scam, and she is being scammed by her husband
into thinking he actually has a job and a future. Other speculation is that
Wink has withdrawn from his internet businesses and scammer societies in
hopes of finding a real job in the real world. I’m not sure what kind of job
a 50 year old failure at scamming is looking for but as of last year his
approach to finding a job was to call people he barely knows and act like a
douche. Rather than ask for a job he says things like. “We should work
together on that thing you are making money doing …. I would definitely make
time in my busy copywriting and sales business to help get your successful
business to the next level”

So far, no takers.

The Peter Wink story would take hours to tell and is so full of doucebaggery
that most people would find it hard to believe. But he is an unbelievable
douchebag.

One nugget of Wink’s genius marketing:

He did a promotion for his potential IMBS marks called … ” What is Peter
Wink reading” if you can find the video watch it. It is exactly as
ridiculous as you are thinking. In this video he mentions that he is going
to do an arm wrestling promotion soon. For fun I looked into that. Basically
his arm wrestling promotion consisted of 4 posts to an arm wrestling message
board, 2 posts where he stepped on his own dick and got called out as a
scammer and 2 posts apologizing for his other 2 posts. Another grand success
from the Supreme partner of IMBS. Peter Wink is a gold mine of hilarious
failure stories. His promised multipart series stopped after the first
installment, possibly because he ran out of books or maybe he was sensitive
to the critical response. Which was hilarious, if I do say so myselves.

Wink is small time in scamworld, not worth a whole blog. He is worth our
attention as fans of scamworld, because everything he does is an hilarious
failure. Peter Wink is our opportunity to bash the victim of scamworld
without guilt. Stephanie Wink should be off limits, she is a collateral
victim who only gets dragged in to it by her choice of husband.

Wink’s scamworld story began in his early 20’s with his imagined involvement
with and real rejection by Tony Robbins. Nobody in Robbin’s organization saw
any value in Peter other than his willingness to buy self help tapes.

His scamworld career has pretty much been editing self help tapes and years
of bootlicking for the people whose tapes he edited. All of whom fired him
for incompetence.

Those of you who have had any experience with a scammer on whose fringes
Wink existed, please share. I would like to establish the timeline and fill
in the empty spaces. Not to fight any scams, but to fill out the caricature
of a wannabe scammer who gets victimized by the real scammers.

He has been described as a Pimp who provides diseased whores by someone who
has real credentials in the publishing world. I view him as more of the
whore, one whose options disappear with every year and every new scam his
name is on. He is obviously stupid, he either gets outwitted in every scam
or has no idea how to keep a scam running.

I question why new scammers would deal with him after he did his best to
throw his last 2 employers under busses. Even going as far as volunteering
to help the feds. Even if that meant LYING to the feds. Maybe trudeau took a
bucket of gold out of a safe to impress Wink, but seriously? Anyone buying
this? A lifelong scammer entrusting Wink with info that could land him in
jail? A safe filled with gold that the feds didn’t find when they
confiscated the property. There is so much untilled earth here. Any new info
(or old info) would be appreciated. He seems like a guy who has been a
douchebag since elementary school. If he stole your pencil in 2nd grade, I
would love to hear about it. Most bloggers have bigger fish to fry,
competent scammers to ridicule and other important business. I am not
similarly constrained, I just want to tell a funny story and to pick a fight
with “Accomplished Martial Artist” “Streetwise tough guy” and “Master
Copywriter” Peter Wink.

One thought on “Peter Wink Under Scrutiny by T. Donahue.”