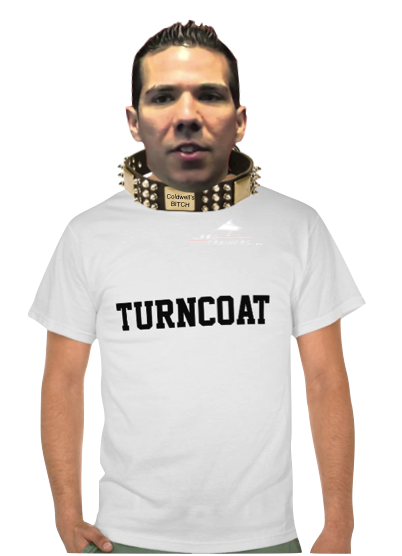 Some people just can’t handle their critics. While some, like Abe Husein, handle theirs with a bit more dignity than say, Leonard Coldwell. Either way though, it’s interesting to note that when you’re revealing the scammers and liars to the world, they immediately label you as a “hater”!

You may well have haters in life and indeed even have some that hate you for being successful. But to state that this is the norm for anyone achieving great success, is just ridiculous.

In the above screenshot, our favourite Turn-coat, Abe Husein, who used to stand with me against scammers but now aligns himself with our favourite lunatic fake doctor, thinks I’m talking trash about him.

That’s a bit unfair really, as all my posts about you Abe, have screenshots of things you’ve actually said on Facebook.

Any trash talk tends to come from your fat balding liar friend, Coldwell.

And to be honest, I have absolutely no idea how successful you are or are not. And quite frankly, I couldn’t care less. If you’re in a successful place in your life right now – good for you! I applaud that! I applaud anyone who betters themselves, their overall way of life and reaching their goals, or at the very least, taking steps to get to their goals!

Much of this ‘hate’ that you talk about, you actually bring upon yourself with your absolutely ridiculous and sometimes hilariously stupid, opinions on others!

I don’t need to relist everything you’ve said here again. Anyone reading just has to click on your name and a list of posts will come up where readers can see your goofyness for itself in every post!

But let’s get to the heart of the matter.

I’ve posted about you when the need arose, because just like I want to reveal other scammers and liars, I felt it only fair to do the same with you!

When we were friends just two years ago, we were going full-throttle to get the truth about GIN out to the masses. We wanted to reveal the ongoing fraud, the lies of the scammers including Leonard Coldwell and Peter Wink. And of course, Kevin Trudeau.

When Coldwell was fired from GIN, he claimed he knew about the fraud for well over a year. And at that time, we brought him on board in order to help us get more info out there. Sadly, later on you would try to make out that you were solely responsible for bringing down GIN. Coldwell brushed your ego and you lapped it up like a good little puppet.

However, as you all know, I started questioning the fake quack when things didn’t add up. Chiefly his information, his numbers and his inability to answer even the simplest of questions regarding his own status.

It was then that Loony started to turn on me and others. You can see some examples of his rantings right here.

It was almost a year ago that I posted about Abe hating on his critics then too.

Kind of ironic then that Abe says:

People don’t like where they are at so they try and slam you to bring you down to their level.

First of all Abe, I know where I’m at, and believe me mate, it’s at a way higher level than you can ever hope to achieve in your current state of pathetic thinking and delusionment!

I’m living my dream, run my own successful businesses both on and offline, take care of my family, have plenty of time to do my hobbies (this site being just one of them), and continue to embrace new opportunities and chances.

Here is a website started a few years ago with one of the sole purposes of talking smack about me and trying to discredit me.

Actually, it was two and a half years ago and it certainly was not of any purpose whatsoever to talk just about you! You really are so full of yourself that you would think that, forgetting of course the complete bullshit you talk and walk. I can only conclude from that that Lenny has taught you well.

Just to give the general reader populus here a small reminder of who you really are, I sifted through several older posts and thought these were rather appropriate (and all have actual screenshots):

This was when you were deluding people by using multiple aliases on Facebook.

This was another name you were using.

Your obvious hatred for police officers just shines through on this old post. And who can forget this little rant not so long ago?:

And more recently, you ranted on and on about people liking sports as being dumb! Not to mention your pathetic sexist rants against women with new borns feeding in public places and your desire to find a robotic woman who will stay in the house, make babies and pretty much have no life and like it!

You do know this is the 21st century right? And you do know that women these days can actually think, feel and do things without men? Right? Or are you trying to implement your own rules of how a woman should be around you?

But let’s get back to why I don’t particularly like you anymore Abe. More so over the last year and a half.

It’s actually quite simple and doesn’t really involve you lying to people about how GIN ripped you off when in actual fact it was you that tried to play the system by not following their rules you lost your money when you tried to scam them. No, it’s more recently about:

You allowed Leonard Coldwell to post on your Facebook pages with his defamation statements and did absolutely nothing!

When he called Connie Schmidt an Aids Infested Hooker – you said nothing and did nothing in her defence!

When he accused Connie of killing his dog Blue, it took you multiple posts and several weeks before you voiced your thoughts on the matter and told him you didn’t believe it. Weeks went by and you did nothing!

He accused Omri Shabat and myself of being child molesters – you did and said nothing!

When Coldwell then called me a “gay child rapist” – you did and said nothing!

Basically, you stood by while Coldwell defamed his critics and did nothing!

You allowed him to post on your timeline on Facebook and spread lies, defamation and disgusting content about others – all completely made-up, which you obviously knew anyway, and you did – nothing

You’re a coward, Abe. You’re an Omega male trying to pass himself off as an Alpha male. And failing.

Thankfully though, you don’t always get the support you think you deserve:

So keep on talking the talk Abe. I don’t hate on successful people. Only on liars and charlatans, and you’re fitting into both of those categories really well of late!

Call me a hater all you want, if it makes you feel better, that’s good. Your critics will always be hated by you and those that are too stupid to see the reality of what you’re doing and think the sun shines out of your ass! Just ask Coldwell – he’s the only guy I know who claims to be such a professional with 4 – 8 Ph.D’s yet lies with virtually every sentence that falls out of his sweaty little face because he can’t ignore his critics and tries to put us down instead. At least I have the balls to call him out and back up what I say with proof.

As long as you keep aligning yourself with scammers and allowing them to spread their vile lies and hatred on your timeline, while deleting those he attacks, I’ll keep blogging about you and anyone else like you.

So quit trying to hide your deceit behind a wall of ignorance, grow a pair of balls and be a man – not a puppet!

PS) Thanks for the publicity! 🙂

An omega male likes to think he’s marching to the beat of his own drum, but the reality is he just can’t keep time with everybody else. While we don’t want to advocate conformity, we do think there are certain facts of life that every guy has to recognize. Being a man means engaging with the world as it really is. ~ Andrew Moore, askmen.com