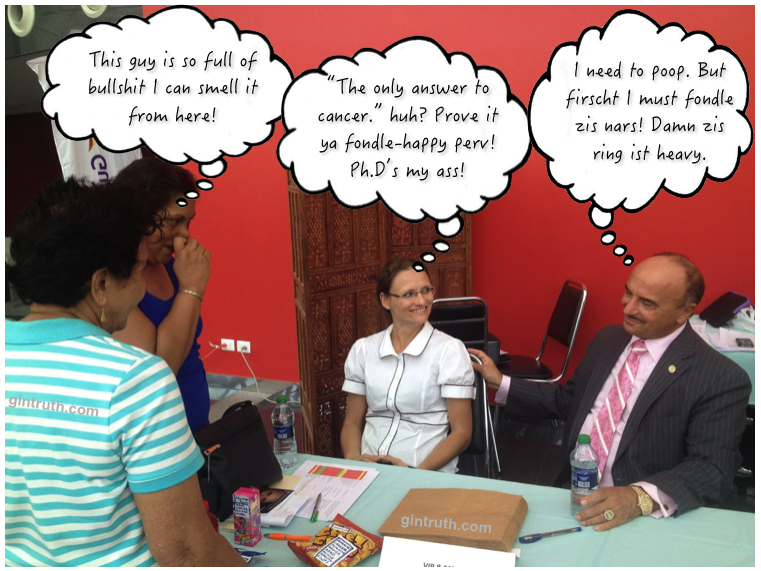 At the recent NAVEL Expo in New York this past Sunday, Loony Leonard Coldwell was the guest keynote speaker. What he said AFTER the event pretty much killed everything he made himself out to be during it. By now you well know that Leonard Coldwell just can’t help but show his true colours when he speaks away from public events.

The image he tries vainly to portray of himself as a well-educated, well-qualified master of medicine and alternate cures, just gets flushed down the pan each and every time he can’t keep his mouth shut on social-media.

You only have to look through the posts on here and other sites to see the factual evidence for yourself. I’m not going to keep posting links to it all, as basically, Coldwell is getting boring now.

But, let’s go through his standard idiot rant as he posted in the screenshot above:

He starts by stating that the Expo was sold out, times three no less! Not unusual for an expo, but I’d be a winner if I bet my last dollar guessing that he probably thinks that’s because he was in attendance! His ego is even more bloated than his stomach!

Then, despite the empty chairs in the pictures, he goes on to state:

People where lining up even around the walls…

…sitting in the walkway…

Not true. There are no walkways through the conference room that show anyone sitting on the floor. Further, New York State Law concerning open meetings, requires that any conference room be of adequate size to accommodate the appropriate number of attendees. If the room is not adequate in size, and is over filled, laws are being broken. The picture in the top left does show approximately 4 people sitting to the side of the stage, possibly on the floor.

But that’s definitely not “sitting in the walkway”!

…and countless people tried to get a peak from outside the door.

Err, yeah. That’s because it was an Expo Lenny. There are usually thousands of people, or hundreds, depending on the size of the venue, at an event like that. But believe me – they didn’t all come to see you.

Looks like about 150 – 200 people did attend his ego-filled talk. But the question remains: why were those 4 people sitting on the floor, when there were clearly plenty of empty seats for them to be in?

His love bucket was at the event, but not his seminar. Probably didn’t want her around to ruin his chances of hitting on one of any number of females in attendance that night! How else is he going to get pictures for his latest Facebook page about ‘Hugs’?! Naturally, Coldwilly couldn’t resist having a few words about yours truly and Connie, by lying about us as has become usual for him.

LOL! Yeah, okay Loony, if you say so.

Connie wrote about these ‘countless posts’ and even did the math on who did how many, but I can assure you, after discussing a few points with the host of the Expo, Alex Lubarsky, myself and Connie did nothing to “…hurt the event”. That was not our intention and only Leonard Coldwell would think and say otherwise.

Alex himself seemed ignorant of the facts during our initial conversations: And in this post, you can clearly see support for the Expo by those Leonard Coldwell fake quack, blatantly lies about as trying to hurt it!: If I lived in the same country, I would likely attend such an event myself. I fully support alternative health, wellness and well-being and those that are experts in their respective field of it all.

Indeed, I did note my support for the Expo directly to Mr.Lubarsky and I thank him for at least reading some of the info. And you can clearly see that he ‘liked’ my comment:

I do not support liars like Leonard Coldwell, who instead of answering simple, basic questions, regarding his outlandish claims, his credentials and integrity, chooses instead to resort to outright lying and downright disgustingly perverted defamation of his critics and those who dare to question him!

Also after the event, Coldwell continued to lie to his readers, stating again that we tried to put a negative sling on the event, and obviously now you all know that we did no such thing:

Loony Leonard further continued to lie even regarding his Trinidad event:

Herr Loon is of course referring to my ONE post which briefly discussed his event in Trinidad – AFTER the event, but you have to remember that Lenny can’t count very well in German or English and seems obsessed with beefing up numbers. He seems to favour the number 42 for some reason, as well as 35,000 when making claims to his cancer cure rate (for which he provides absolute zero proof), and the number 42 for thinking that’s how many millions of dollars myself, Connie, Salty Droid aka Jason Jones and Omri Shabat, and others, are being paid by Big Pharma to shut him up.

He forgets though that they wouldn’t need to pay that much. They could just as easily use the same service he’s looking to pay to use to shut us up, even if that means we get killed!

Some of those in attendance of Coldwell’s little gathering at the event, have been bleating about how fortunate they feel to have met him. One fan in particular truly believes Lenny came up with the information about alkaline diet being a cancer killer, and other such obnoxious claptrap. Lenny hasn’t done anything original other than tout his diet supplement while strutting around on stage with a rotund gut sticking out of his mothballed suit. You can see cancer myths debunked here, but please do your own research – Lenny’s fans never do. They’re content believing anything that comes out of his mouth, just so long as they don’t actually have to ‘think’ about it!

In other social media posts which link to the video of Loony’s little talk, people have commented about something he said regarding a large-sized young woman at the event.

I’m inclined to agree. You’d think a man who claims to have four Ph.D’s and also claims he’s as famous as Chuck Norris in the Martial Arts world, would speak much better English. After all, he alleges that he’s had countless articles in prestigious medical journals around the world and that he’s the best loved speaker as voted by…erm…yeah, we couldn’t find anything on who actually voted for this lying sack o’ crap either.

Even social media site Facebook is watching his pages now after some of his very malicious and disgusting posts.

Lenny of course, immediately shows his usual paranoia and thinks that now even Facebook is trying to shut him down because of his claims about curing cancer: Gotta love the fact that this egotistical, self-loving, uneducated fake-quack with 4 to 8 unacredited Ph.D’s (No one is quite sure how many, not even Coldwell, as he changes the numbers so often that even he forgets how many he tells people he has), doesn’t even know how to take a screen shot on his own computer and has to use a camera to get them! Nor does he obviously understand the concept of Stay Logged In, a point Connie was kind enough to share with him. But she’s generous like that as you can see on this post she wrote on Loony’s website. No doubt it will be disregarded:

As I said earlier, Lenny’s getting boring, mundane and monotonous now, and it might be time to move on to other scammers.

The world is full of them!

But, don’t worry Loony. I’m a long way from finished with you yet 😉 As long as you keep lying and trying to cover up the truth about your real credentials and claims, I’ll be right here to keep on bringing the truth about you and your sick, perverted mind to the world.

As for the Expo – I hope it was a great success despite the prescence of the poor choice for keynote speaker!

Lenny has foot and mouth disease…again…

Trudeau’s telemarketing scam rolls on despite evidence of fraud.

What do an illiterate burger flipper and a homophobic jew hater have in common? – They’re both morons!

Just a reminder that fake doctor Coldwell is an sexual deviant:

Give a man a rope and he’ll hang himself – as Leonard Coldwell is doing so with his idiotic pursuit for damages!