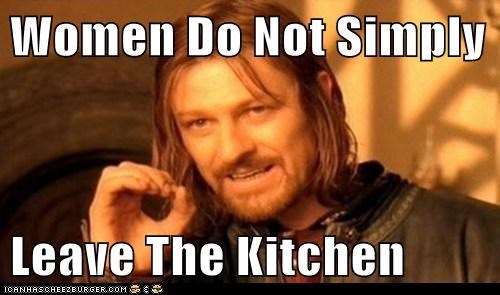 Just when you thought it was safe to start feeling like an equal, this douche-bag opens his mouth without thinking – again! He’d been relatively quiet of late, but as is usual, and of course with some prodding from fake loony quack Loony Coldwell, Abe’s returned spouting more of his chauvinist clap-trap.

Here’s his latest mouthful of sewage:

I won’t go into the other commenters here. It’s pretty obvious where they each stand.

A couple of points stand out here:

The world doesn’t need more women in the workforce.

Darn you women! How dare you want to make a living and fulfil your dreams and goals!

What it needs is more love and care at home from a loving female.

This image springs to mind: Wow, Abe! Why don’t we just club ’em over the head, tie ’em to the bed to splurge babies everywhere and give ’em a new kitchen sink every Christmas?!

Having a job and joining the rat race will NOT improve your home life!

I think what he really means is, having a job as shift manager at a fast food store like him, won’t improve your life. It’ll just make you deluded, bitter and more repulsive to females.

Personally, I have a great job with very good money, lots of travel, great co-workers and feel like I have a reason to face each day with zest!

But I probably wouldn’t if I was working as a shift manager at a fast food store like him!

And like many of you, I have different sources of income from other work, too. It’s about finding the right woman, too.

That’s just frickin’ hilarious given that recently, Abe was spouting that he doesn’t want a woman until he’s financially ready for one! Jeez Abe, why don’t you just say “Screw real love! I’m going to wait unit I’ve got money and just marry any woman that’s stupid enough to go out with a chauvinistic pig like me! Then I’ll make her have babies whether she wants them or not, cook my dinner and work a home business with me – from the kitchen!”

Any woman that would put up with you Abe, would have to be a completely deluded moron with the I.Q. of the hind-leg of an octopus!

Do you seriously think you could ever make a woman happy with that mentality? Might as well go back to the 1800’s and screw the efforts of the Suffragettes and other women’s rights campaigners!

Better yet, why not just make it illegal for women to get a job like they do in some cultures and tell her she has no rights to talk or do what she wants!

On the plus side, with that shitty attitude towards women, it’s highly unlikely Abe’s going to contribute to the gene pool any time soon, if ever.

In his book Real Magic, Dr.Wayne W Dyer, quoted Joel Goldsmith (contributor to metaphysics and author of The Infinite Way) and the words he wrote about a relationship inside marriage:

Neither husband nor wife has any rights; they have only the privilege of giving, but they have no right to demand anything of the other. – Joel Goldsmith, November 18th 1959