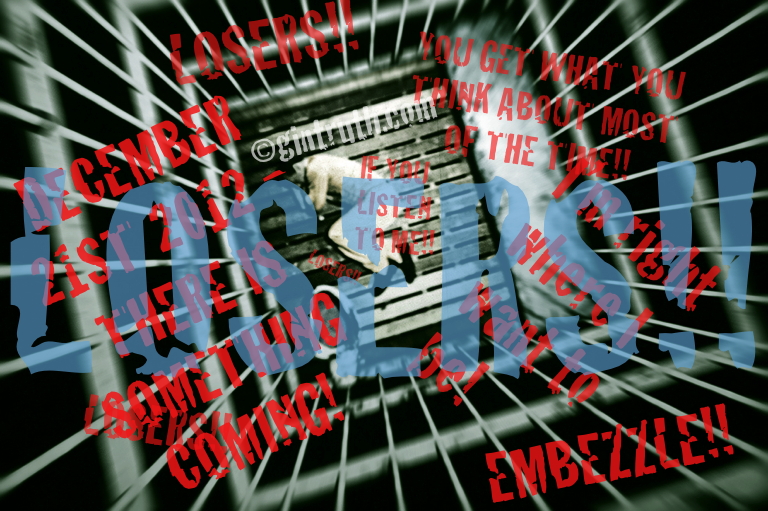 So while the sale of GIN has yet to be confirmed, Trudeau is still trying to bullshit people from jail, and fake-doctor Loony Leonard Coldwell tries conning Trinidad residents out of their money, with his IMBSingU Club scam. So, while sitting in his jail cell, Trudeau hasn’t yet taken to the concept the judge is hoping for. That is, Trudeau still hasn’t started reviewing his dastardly deeds of lying, conning and stealing his way to riches.

How is it that for several years of operating GIN, Trudeau constantly told people little tidbits of info such as:

You get what you think about most of the time!

But yet, there he is, rotting away in a jail cell, and most definitely NOT for some crap he wrote in his diet book, as many misinformed and uneducated (in the Trudeau debacle sense), individuals keep regurgitating.

No, Trudeau is sitting and rotting for fraud, embezzlement, theft and contempt.

It’s not hard to see the trail of destruction he left behind him.

He cared about his mess as he tore a path through thousands of bank accounts, wallets, check books about as much as he did about the owners of those same things.

And the result? – Jail time!

That’s the bottom line, pure and simple. And yet, his deluded minions refuse to accept that. Instead, choosing to point the blame at the government, the courts and those who refuse to believe in him!

This is a fact that Kevin knows well, and is using it to his advantage.

Having heard that his story of a life of debauchery may be being picked up by a popular TV show or two in the USA, Trudeau has urged his little minions to contact the producers of one show, as was noted on social media:

Katie is having his legal defense minions do damage control in advance, re American Greed. He doesn’t mention AG but does mention CNBC. Someone just forwarded this email to me, which was sent out on Sunday, April 27.

Hello,
Bill Kurtis is doing a show about me for CNBC…I would imagine not in a favorable light. I would suggest you CALL and send an email to the producer (Bernie Dudek) and try to talk to Mr. Kurtis himself. Also, get others to call and email as well. I would suggest telling them about how you/others have benefitted from my books/seminars/audio programs/GIN etc. And share your thoughts of the case and 10 year sentence as well. I would be very grateful for any help! Thank you!
Kevin Trudeau

May Every Day Be Your Best!

I already contacted the producer and gave him a brief synopsis of what has been really happening and where he can find more info. Serial deluder Abe Husein has also contacted them offering his version of events, and of course, he threw in that it was he and he alone that took down Trudeau.

Well, thankfully, the rest of us know the reality of that side of things and Abe is certainly no Honest Abe, when it comes to telling the truth!

But back to the fake quack.

He’s just been in Trinidad, living it up while desperately promoting his IMBSingU Club scam.

When scam world starts closing in on you at home, you take it overseas, obviously!

Matching socks and an ever-growing belly bulge? Must be that BePureCleanse crap he sells working so well obviously.

There are several more pictures of him on his little jaunt. Still wearing the same suit he had on the cruise, and that hideous trademark pink shirt and tie!

Life must be good when you waste the court’s time by not bothering to turn up for your own defamation case. Yes, that is what happened with Lenny.

In this article, I told you how Loony was threatening to sue Jason Jones, aka Salty Droid. But despite his efforts, he failed to do so. Partly because he was dropped by his attorney quicker than a fat kid dropping a salad!

And secondly because he had failed to do an ounce of research on his allegations and thus wasted everyone’s time, including his own. He didn’t even bother to turn up in court and Jason, being the well-trained attorney he is himself, basically buried Coldwell with so much legal knowledge, that the porky schweinhund was left running with his curly tail between his porky little legs.

He ran so far, he ended up in Trinidad, doing a seminar there, still promoting his scammy books and lies, and believing he’s some kind of uber-superstar! He certainly isn’t!

If Trudeau’s minions seriously believe that he is in jail for something he said in his books about dieting, then why isn’t someone investigating Leonard Coldwell for his claims about curing cancer, in his books, as well as publicly declaring that he has 4 Ph.D’s and is as famous as Chuck Norris in the martial arts world?

The fact remains that people will believe what they want to believe and once their minds are made up, you’ll have a hard task convincing them otherwise, even when the evidence is as clear as daylight.

Some minions just have a hard time accepting that their glorious leader(s) could be anything but angelic.