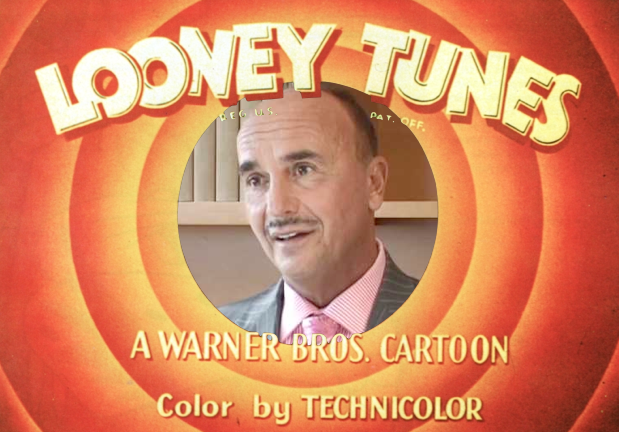 The the fake doctor just can’t stop being gleeful, like a naughty child pulling legs off a spider, as he thinks he’s knowledgable about the law. I wonder if as a kid, when he had a different name, growing up in Germany, probably not as an sexual healer, if he was a notoriously well-known brat then, too? Actually that question is a bit of an oxymoron, as we all know about Lenny’s, or rather, Bernd Klein’s, less than colourful past in Deutschland.

But that’s not what this post is about. Not today anyway.

No, this post is about the rantings on Facebook, Loony Lenny has been gleefully throwing around, regarding his pursuit of suing Jason Jones, aka Salty Droid.

A posting the loony bald leprechaun put out on Facebook today, he had this to say about Jason:

The information on the listing, states:

Registration Status: Not authorised to practice law as attorney, is not currently registered with ARDC and has not demonstrated required MCLE compliance.

Coldwell, true to form – his moronic form that is – is jumping around thinking that this actually means, Jason Jones is not a lawyer! No, Lenny. It means quite simply he is a lawyer, he’s just not registered at the present time to practice law as attorney, as the info states.

It also means, that you ignored one crucial fact:

Jason Jones is not a practicing attorney, by his own admission, but did attend law school and qualified as a lawyer, and is in fact, defended by The Randazza Legal Group!

It’s not the first time Loony has threatened legal action against Salty/Jason, and although we’ve yet to hear his take on current events, my guess is, he’s as worried about as much as I am a snowflake. Lenny was all hot air then, and his legal team, aka the $30/month legal advice service with any lawyer on the list, according to Lenny, are passing the current case over to another lawyer, because “now it’s federal”.

Sounds to me more like his current lawyer is dumping his sorry fat ass because they know he has all the prowess of a fart.

In Salty’s ‘GIN on TV & Lawyer House Calls‘ post, Salty noted something many of us have been thinking and feeling and touching…oops, sorry, thought I was Lenny with a female client, for a moment there.

Leonard Coldwell likes to talk shit about the world as he wishes it was :: rather than as he knows it is …

Just for all the doubters to know. My lawyer just got of the phone with the marinated Troll – he was sh.. his pants criminal and civil lawsuits against him all the other losers have been started to day.

That’s just part of it, you can read the rest on Jason’s post, obviously.

I remember when Loony posted this last year. And Jason did indeed speak with Loony’s lawyer back then. But it was certainly not the result Lenny tried to make out.

As we waited, and waited…and waited, for legal proceedings to begin, it was becoming apparent, that Loony Leonard is as full of shit as a cesspit.

And something tells me this time around is no different.

Also, given his recent rants, we’re starting to see a familiar pattern here. A pattern that in Lenny’s mind, exists as real.

To date, Salty hasn’t removed any posts concerning Lenny, and is unlikely to do so. And as far as we can tell, he’s given up on thinking Jason is Omri. Quite possibly because it was pointed out to him by his ‘legal team’ just how stupid that is? Hmmm…food for thought….

Everybody ever messing with me should know that I never ever lost a fight in my life and see what it says on my website. “I will not start the fight – but I will finish it. One done a few more to go.

It’s laughable the way you hold to ideas in your head as if they were real. Actually, it’s just laughable that you would ever possibly have a good idea at all.

But not as laughable as this:

I will teach these losers how to spell…

Fast forward about 10 minutes…my eyes are dry – er, now. I was crying from laughing so hard! Not only does that statement make absolutely no sense whatsoever, the irony that you would be the one to talk about spelling, is just comical!

Lenny further cries that we call him nasty names n shit, but has no problem doing the same thing when it comes to Cosmic Connie and myself, as well as others:

And let’s not forget of course, that Lenny was quite happy to stand alongside of Kevin Trudeau, knowing fraud was being committed, so long as he was getting his $20k a month in salary! Had that not been cut off, you can bet your bottom dollar that Trudeau didn’t get his grubby hands on, that Coldwell would still be supporting his former BFF – all the way. After all, he truly believes he was the key to keeping GIN successful!

In the meantime, I’ll keep you updated as things unfold, if they unfold, which I highly doubt. As my team of legally trained socks have informed me is usually the case with Loony.

Where’s that rope? Oh yeah, it’s made of Coldwell’s words.