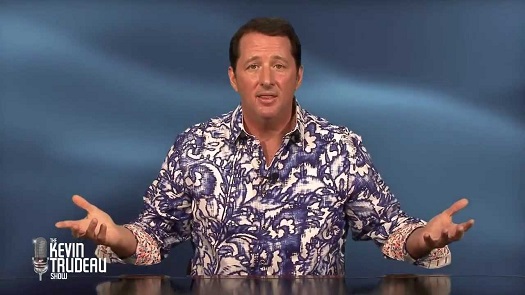 Informercial kingpin Kevin Trudeau was immediately taken back to jail today, after being declared “a flight risk” by the court, after a jury found him guilty of contempt.

In a landmark decision during his criminal hearing, Kevin Trudeau was hauled back to jail, being declared a “flight risk” by the judge, after the jury of 6 men and 6 women, found him guilty of contempt of court.

It is not known how long he is expected to stay behind bars at this time, but as he has both Civil hearings and Criminal hearings to further attend, it is likely he will be bailed. Or he could be chauffeured back and forth between the prison cell and court room, courtesy of the US government.

If found guilty in his criminal hearings, Trudeau could be looking at anywhere between several years to life, behind bars.

Media outlets have picked up on the recent hearing, which was attended by approximately 35 Trudeau supporters. One media station saying some traveled from afar to attend, and then shows a woman speaking very bad French. With a slight American accent.

Another deluded supporter even referred to Trudeau as similar to Nelson Mandela!

No, sorry, but that’s just complete crap! Trudeau isn’t even similar to Mr.Mandela’s big toe! Kind of reminds me of the bullshit video Trudeau made, comparing himself to Ghandi and Jesus Christ!

Here’s why he was in court and why the jury found him guilty of contempt: 5NBC Chicago Video

One point I can agree on with the prosecutor, Marc Krickbaum, is that the book was misrepresented. After buying the books, I was literally mortified that a weight loss and diet program, would require you actually inject yourself, while restricting your diet to just 500 calories a day! As a fitness fanatic, you don’t need to know rocket science to know that an intake of just 500 calories a day, is going to make anyone lose weight, quickly!

“He made the book sound way better than it actually was,” Krickbaum said. “If he told the truth, that book wasn’t going to sell nearly as well than if he lied.”

The book describes a diet of 500 calories a day and the use of prescription hormones. The truth of the claims in the book itself weren’t at issue in the trial – only the claims Trudeau made on TV as he sought to get viewers to purchase the book.

I for one, would never have bought it had I known about having to inject oneself as part of the ‘diet’. And as a consumer that had needs like millions of other consumers, I’m pretty sure millions of others wouldn’t have bought the book either, as Mr.Krickbaum noted. Thus his statement was spot-on!

“He lied about what was in his book,” said prosecutor Marc Krickbaum in his closing argument. “They weren’t little fibs. They were blatant misrepresentations.”

More on his statements from this ABCLocal News Report.

The Chicago Tribune was at the court house and reported live on the events. Their report with video can be seen here.

Of course, it hasn’t been 5 minutes since Trudeau started warming up his bright orange one-piece, and the Loony Lenny camp are already in glee, and of course ad-libbing to the actual facts of the day.

The picture on the left is Peter Wink, the guy responsible for with-holding Lazyman orders and not refunding money, gloating over Trudeau’s previous incarceration at his Civil hearing earlier last month.

Lenny of course had to say something and as usual, gets it wrong.

Lenny as usual confuses fact with fiction. His parents’ house would only be taken if Trudeau was to flee the country or fail to show for court. Lenny would know this if he was as conversant with the law as he likes to think he is.

Trudeau’s parents have not had their house taken by the court.

You’d think Robert Trudeau would show some better support for his brother, if only for his own credibility. But since he’s also aligned himself with Camp A’La’Douche, he hasn’t really been much of an advocate for brotherly love.

Lenny of course shows his usual level of contempt for women with his pathetic commenting.

And as we can see from this excerpt taken from the latest GIN Magazine (which incidentally, shows a rather successful Family Reunion 2013, much to the chagrin of Coldwell.), Nancy Ashley is anything but “trailer trash”! Very tasteful as usual Lenny. You must have got her confused with your last date!

As for the latest GIN magazine, I’m kinda curious as to how they are able to pay out the $500 to those winners, given that the Receiver has control of all assets and money, and why Trudeau’s untested supplements are still being advertised. Still, one thing is for sure, (and this is sure to piss off Loony, Insane and Wank), even if the GIN office is shut down, the GIN concept will continue to grow and grow. GIN has already brought people together from all walks of life, from all over the world and people are setting up their groups in 100’s of locations around the globe, to interact with like-minded individuals. That’s got to be a good thing, unless they’re still trying to sell the same old cock-n-bull story how GIN is the only way to be successful. Still, it could be worse, people could be conned into buying membership to the IMBSingU Club!

And Lord forbid that they would recognise the truth behind what Connie Schmidt has to say! And it is painful to know that in future hearings concerning Trudeau (and there will be many I’m sure – concerning money laundering, fraud, etc), Loony Len, Make-it-Up Abe and Slimy Wink, along with their minions, will continue to give all praise to each other, albeit most of it going on Abe, for bringing down Trudeau. FTC and courts for the past decade or so, be damned. I guess their crimbly Christmas has come early this year!