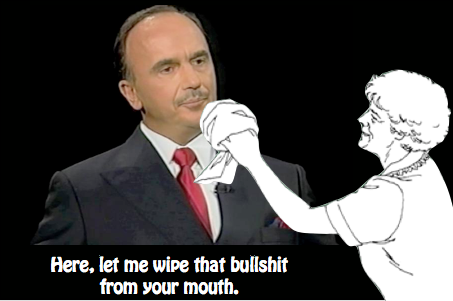 As if the audio of him talking complete bullshit wasn’t enough, he now continues to attack Connie Schmidt, making false allegations and libellous statements.

For many people, including one Stepehen W on Youtube, who seems to think the sun shines out of Loony’s rear end, Coldwell can do or say no wrong. Which just goes to prove, there are more stupid people in the world than you first realised.

In the screen shot below, he says the vilest things and all based on his own sick, twisted, wishful thinking.

Personally, I think he’s long-overdue an investigation for fraudulent claims as well as a lawsuit for defamation.

Just so you know, Connie has never asked Peter or Lenny for a date with anyone! She has in fact been in a very long-term relationship, happily, with her partner Ron, some dogs, cats and no doubt, many other things that they have lovingly adopted as strays over the years.

Lenny hates Connie simply because she writes on him and Trudeau, as well as dirty scammer, Peter Wink, so eloquently.

At the end of the day, Lenny just hates anyone who dares to reveal the truth about him. Not least the fact that he’s not even a medical doctor! So, while some of you are busy kissing Loony Lenny’s fat sweaty little butt, thinking he can do no wrong, be sure to see all sides before you judge others.

This sad fat little loser still hasn’t shown ANY evidence of his claims to cure cancer, nor has he responded to take up my challenge to cure kids at Great Ormond Street Hospital in London, UK! He’d much rather gloat at their demise! (Scroll down to yellow boxes on this link).

Bring it on Lenny…pick a fight with a man…not a woman…after all, we can go in the Dojo and pit my 30 years of Wu Shu Kwan and Shorinji Kempo, against your alleged 30 years of being right up there with Chuck Norris!

Fact: Leonard Coldwell, aka Bernd Klein, is a fake, lying, overweight, sexual pervert. Deal with it.

On the 2012 cruise, before I knew who Loony Lenny was, I’d heard rumours that women would avoid him at all costs. This recent Facebook discussion seems to confirm some of the suspicions I had heard about Coldwell. And if true, goes to show what a disgusting abuser of women he really is! And this kind of story would further highlight the truth behind the police report on his alleged sexual conduct, as reported by two ladies violated by this disgusting pig of a man!

Which begs the question: Why hasn’t he been charged with anything yet? All it takes is just ONE woman he has abused, to stand up to this sycophant, and say enough is enough!

Recent Facebook mummurings have speculated that Coldwell has a form of syphilis, which wouldn’t be surprising given his inability to control his sexual urges. But speculation is merely hearsay until proven, but that doesn’t seem to bother Coldwell given that he speculates as gospel!

5 thoughts on “Coldwell – What he hopes you won’t see – and it’s disgusting!”