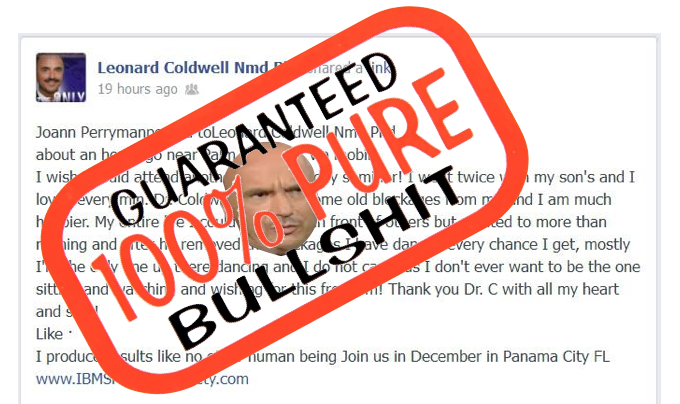 Loony Lenny Coldwell is making new claims that he and only he produces results like no other human being. In more desperate attempts to bloat his already over-inflated ego / stomach, Loony Lenny Coldwell, that fake doctor who ludicrously claims, without a shred of evidence, that he has personally cured more than 35,000 people of cancer, and that anyone, including children who has cancer, deserves it and got it through their own fault, now claims that he cured a woman’s phobia of dancing!! (Also known as Chorophobia, and an excellent article on it and how to cure it can be found on this site).

But more than that, he claims that he and only he, can do this like no other human being! (Although HERE’S A LIST of people much greater than Coldwell, who have achieved a lot more than the sexually deluded one could ever hope for!

(Gintruth does not agree nor disagree with the findings of this list, but believes it contains more credible names than Coldwell.) Never mind that the grammar is piss poor, and that I have doubts as to the authenticity of the claims anyway, but this seems to be pretty much standard Lenny practice for trying to put bums-on-seats, at events falsely advertised as reunions or 2nd annual meeting, in the first year of business.

Incidentally, Lenny must be still butt hurt that his former BFF Kevin Trudeau, is not in jail. Perhaps that explains why Lenny and Abe Husein are full of shit? In the meantime, Trudeau is still free to make a living, a legitimate one, but is not allowed to fund his lifestyle using any current assets under present businesses, as this recent pdf court document shows. (Thanks Connie 🙂 )

Let me tell you a little story Lenny. Because your story is about as believable and exciting, as watching tartan grass grow.

Back in 1996, when you were still a pervert in Germany and trying to bullshit your way into the American Dream, with false Ph.D’s, name changes to hide your sexually deviant past in zee Farzaland and no doubt, sexually molesting more women by telling them they had cancer, I was working in the great State of Connecticut, while attending Danbury College and Yale (to complete my Company Law module), as a Camp Counsellor on a popular kids activity summer camp.

Apart from the unforgiving heat, bugs that mugged you on the way to the washroom and the occasional skunk that would be hand-fed cookies, teaching under privileged kids how to abseil, zip-line, ride trails, archery, crafts, and many other fun things, was one of the best times of my life.

Much of that though, would have fallen into the recesses of memory, if it hadn’t been for one young 11 year old girl in particular. I’ll call her Michelle (not her real name) for the purposes of this story.

Michelle didn’t like to do a whole lot of stuff. She didn’t like people too much, never had a reason to like them. Family upheaval, single parent upbringing, abuse, bullied at school – you get the picture. So on one of my days off, I was taking a casual swim in the ‘pool’ on the lake, getting some much needed cooling down from the sun. Michelle was sitting on the side of the ‘pool’ (basically some jetties laid out in a square shape to make a pool area in the lake), alone and not looking happy, so I went over to where she sat and asked what was wrong.

Asked her why she wasn’t off with the other kids having fun.

I later found out that the other kids did in fact ask her to join them on activities, all the time.

Asked her if she wanted to swim. She didn’t know how. So I said I could teach her. It took about ten minutes just to get her in the water up to her ankles, as she was literally terrified of the water. Hence, step one achieved: overcome fear of water.

The next half an hour was spent assuring her that the water was not deep and that she could happily sit in it, without going any further. Step two achieved: trust the water and your teacher.

Step three was the hardest: get her floating on the water, using a large buoyancy aid. I managed to do this by telling her all she had to do was literally lay down in 5 inches of water, holding on to the aid, and go nowhere, facing the shore. Success!

Finally with some smiles on her face, she was ready to venture a little further into the water, with the buoyancy aid firmly tucked under her arms and across her torso, so long as I didn’t let her sink.

For the next two hours, she happily ‘swam’ around, with the aid and with me assuring her she was okay on her own, she found herself having fun for the first time in goodness knows how long, and her fear of water gone!

Michelle spent the next few days swimming in that ‘pool’, and by the end of the week, was splashing around happily, without the aid and with the other kids! Not only that, but she found a new enthusiasm for joining in with the others in various events, for the rest of the summer.

By the time that summer camp season was coming to a close, she was a much better person in herself and had new friends in tow everywhere she went. Her newfound confidence in herself though, was the most rewarding thing for both her and myself. I had changed someone’s life for the better and it felt great!

So you see Lenny, you’re absolutely NOT the only human being to produce results like no other. And the fact that you think you are, is proof enough that you are a man that should be clearly investigated for fraud, delusion and illness of the highest mental disorder. While you’re at it, take Peter Wink and Abe Husein along with you too. Because those two morons are clearly mentally challenged too.

In fact Lenny, given the way the excerpt is written, and how you sign off on it at the end with your trademark shitty grammar showing the same writing consistency throughout, I doubt highly that you removed any blockages from anyone at all!

There seems to be only one real blockage Lenny, and that’s the one that has obviously resulted in your ass being constipated so much, that it has to come out of the other end in the form of pure bullshit! One thought on “Self-Delusion knows no bounds with Leonard Coldwell believing he cures everything!”