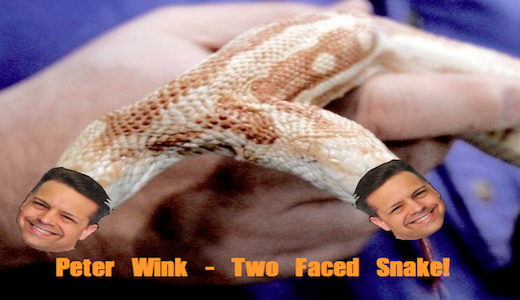 Peter Wink was once in charge of the LazyMan Program. He knowingly with-held thousands of orders and cared not one iota that people lost money! No apologies for the bad graphic, folks. A snake is a snake.

In his latest mumblings, Peter Wink, the one time Director of Marketing for GIN, would have you believe, that the LazyMan fraud was all Kevin’s doing!

Unfortunately for him, Peter Wink would rather you don’t know that it was in fact his fault why LazyMan’s were never delivered.

Here’s what he had to say in a recent Facebook posting:

Peter Wink
51 minutes ago
To All GIN Members/Affiliates,

Being the only person making public statements, who is actually legally involved in the FTC case against the con, I can say that I know beyond a shadow a doubt that the club assets are in play and appear to be a bargaining chip. At a minimum the Westmont office will be closed down, leaving 30 or so people out of work (which is too bad). Actually I could care less about any of them as nobody supported me when I called the con man out for what he was doing to the Members of his club. But I had to do what I felt was right. Also, Alex Jenkins of the Illinois Attorney General’s office has all the evidence about lazy man and I know that as a fact. Another thing many of you may not understand is that KT’s former lawyer is under a huge fraud investigation, his former right hand man Neil Sant threw him under the bus at his deposition, as did Michael Dow the company CFO. What happens after the Chicago closing is going to be up to the judge. If the FTC takes club assets, which all signs point to as they’re case in pretty rock solid now, it will not be able to run in Europe. This will all play out next week and there will be live updates on the IBMS Master’s Society Facebook page as the proceedings progress next week on May 21st during the first break.

As far the Judge Guzman criminal proceedings, I’m not directly involved, but KT told me with his own mouth he believed jail was not even a question — it was a given. Again, it remains to be seen, so stay tuned. Personally I’m tired of KT as he is becoming more insignificant as the proceedings unfold. I’m just sorry I ever worked for this obvious crook.

Now it is time to do what’s right for you…

If I had money owed to me for Lazy Man, I’d beg them for a refund or do a chargeback with my bank NOW — before uncle Sam keeps my money. If I was planning on going to Go-Five Star Weekend, I would request a refund right away. First off, GIN assets may be gone and the event MAY not happen. Hard to say. At a minimum it is a very safe bet that the con man himself will not be able to appear. All they will do is try to sell you more CDs and other useless junk. The main thing is to do what’s right for you and get whatever monies you are due right now before next week. Hugs!

Yes, he’s legally involved in the FTC case against Kevin Trudeau, because he made a deal with them in order to avoid prosecution. In other words, he sold his soul in order to avoid responsibility for his part in taking members’ money and delivering, well…nothing basically!

He speculates about the GIN offices being closed down, as has Abe Husein, fake-doctor Coldwell and their loyal band of morons who were gullible enough to join their IMBSingYou ‘club’.

Actually I could care less about any of them as nobody supported me when I called the con man out for what he was doing to the Members of his club. But I had to do what I felt was right.

Not unexpected. He didn’t care about what he was doing to the Members either, and was more than happy to keep taking and with-holding money from them. For more than two years. As for doing what he felt was right, it’s a pity he didn’t do what was right, in the first place! Which would have been to either deliver the LazyMan Orders to members who ordered them, or return their money for failing to deliver!

…has all the evidence about lazy man and I know that as a fact.

because hopefully, the Attorney General will recognize that Wink played a key part in this fraudulent practice and throw his plea-deal out the window! And of course he knows that as a fact! He should do – he was the one that snitched like a bitch and denied any wrong-doing. i.e., like that kid in the playground that broke the window but pointed the finger at the other kid, saying “He told me to do it so it’s his fault!”. Doesn’t matter that it was him that picked up the brick and threw it. Multiple times.

He goes on and on about others doing wrong, who blamed who, etc. As usual, avoiding any responsibility for what he did, and goes on to state that anyone who is owed money for Lazy Man Orders, should request a refund from GIN.

Knowing that it was Peter Wink that was responsible for enforcing the non-delivery of orders, while with-holding members’ moneys, personally I’d be knocking on Wink’s door and demanding he be the one to pay back every single penny to those who lost thousands of dollars due to his actions!!

At this point in time, I am not going to get into how Wink, Husein and fake-doctor Coldwell have continuously and erroneously predicted the demise of GIN. Because a: they’ve been continuously wrong on this point again and again. And b: because the aim here is to highlight how Wink and Coldwell, were both very willing participants in Trudeau’s schemes, even when they had full knowledge of what was going on, for more than a year and said nothing in all that time! Naturally they use more bullshit to justify this, but by now, we all know better.

And I can’t help but wonder if Coldwell and Husein are aware of just how Wink is slowly but surely, distancing himself from his former circle-jerk partners? After all, Wink is making claims that it is he and he alone, who REALLY knows what’s going on with the investigations. (see the update May 15th, a little down the page, in red.) Post by: Connie Schmidt.

You have to remember that there is no love lost between thieves and as has been evident, they’re each in this for themselves.

That’s gotta smack a little bit for the other two, two-faced snakes!